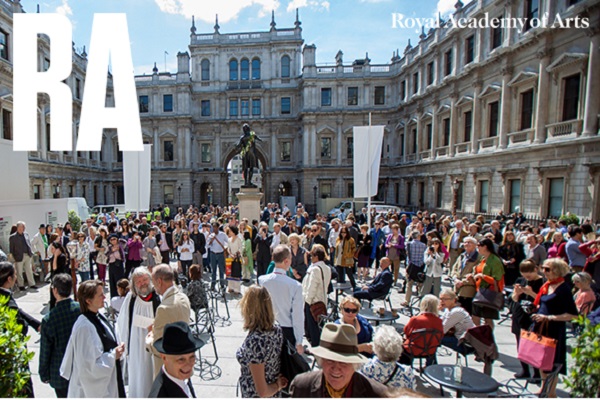 I’ve been here just a few weeks and it probably won’t surprise you to know that it’s been busy to say the least. When I accepted the post of Director of Artistic Programmes I said there is no institution like the RA, not just in Britain but anywhere in the world, and everything I’ve encountered so far reinforces this view. Not least the four exhibitions we’ll be presenting in the coming months – which epitomise much of what makes the Royal Academy so special, so bold and so important in today’s cultural landscape.

Take the Summer Exhibition: Anyone can enter; all works are chosen by artists and every year it serves as a potent microcosm of what is happening in art and architecture right now. Yet there is also a wonderfully eccentric sense of fun about this annual celebration. From the parade down Piccadilly to the drinking of Beef Tea during the hanging, the Summer Exhibition is a long-standing and peculiarly British institution – 246 years long in fact. But none of this detracts from the quality of an exhibition that remains determinedly modern; from sculpture and painting, to video and installation, the work of established artists sits side-by-side with the work of new and emerging talent.

In July, Radical Geometry: Modern Art of South America arrives in The Sackler Wing, formed from one of the foremost collections of Latin American art in the world. This is an exhibition that stretches across four countries over 50 years, encountering some of most important and under-rated geometric art of the 20th century. The work frequently blurs the boundaries between painting and sculpture and art and poetry as well as engaging with the complex political histories of South America. Almost everything in the exhibition has never been seen in this country although artists such as Lygia Clark and Hélio Oticica have recently emerged as historical stars.  My prediction is that within the next decade many more of the artists included in Radical Geometry will follow – you can make your own minds up when you visit.

In Burlington Gardens, I look forward to Dennis Hopper: The Lost Album. The 1960s is a decade often tied up with a certain romance and idealism but the photography of a man better known as a Hollywood film star paints a far more complex picture. Hopper captured the street life of Harlem, the Civil Rights movement, the urban landscapes of the east and west coasts, hippy culture and Hell’s Angels – an America pulsating with change, on the brink of social revolution. This is Hopper’s America and when you see these 400 photographs together, it can feel an unsettling place – but one which feels utterly compelling and underpins much of what America has become in the 21st century.

Finally, in the Royal Academy Schools, our third year students reach one of the most important moments in their career to date: The RA Schools Show. Their work will be seen by collectors, critics and you, the art-going public. As ever, you can expect a heady mixture of sculpture, painting, performance art, video and more –which gives a glimpse into the future of British art and serves as a reminder that at our heart, we are an Academy for artists.

So, as I look forward to the first of many summers to come at the RA, I hope you will join me in making the most of all we have to offer at this ambitious, occasionally off-beat and always inspiring institution.