There were high emotions at the benefit concert One Love Manchester

There were high emotions at a benefit concert staged by Ariana Grande in Manchester less than two weeks after the terror attack following her gig in the city. But the show also demonstrated the power of pop music to bring people together. 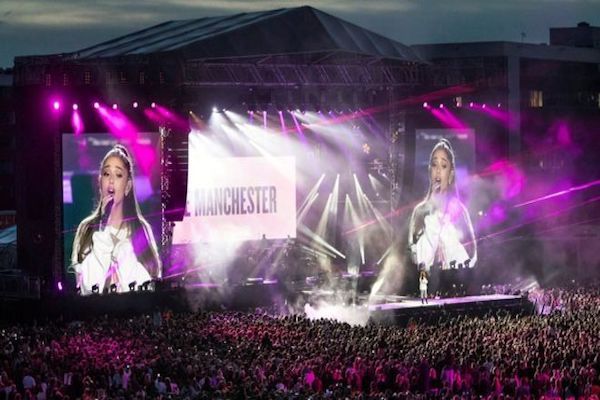 The all-star show was held to remember the victims of the suicide bombing at an Ariana Grande concert on 22 May. Despite the circumstances, a celebratory atmosphere prevailed as Grande herself returned to the stage. She told the crowd: "I want to thank you for coming together and being so loving and strong and unified." She added: "I love you guys so much, and I think that the kind of love and unity that you're displaying is the medicine that the world really needs right now." Visibly moved at times, the 23-year-old US singer performed with Miley Cyrus and the Black Eyed Peas, while other highlights were provided by Katy Perry, Coldplay, Robbie Williams, Liam Gallagher and Justin Bieber. Ciara Lynch, 15, from Wigan, was at the Manchester Arena show that was attacked, but said she "didn't think about it really" during Sunday's concert at Old Trafford cricket ground. She said the One Love Manchester concert was "amazing", adding: "It was emotional at the same time. "When she sang One Last Time, I cried then. But everyone was so close, even if they didn't know each other. It was really good." Her friend Lauren Bromelow, also 15, said it felt like everybody at the show had "come together as a family".