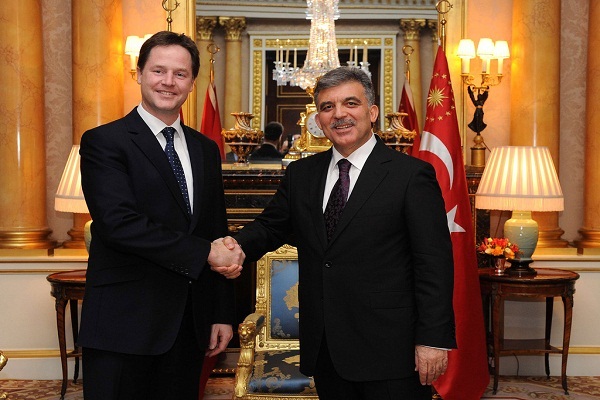 Deputy Prime Minister Nick Clegg is leading a business delegation to Turkey to strengthen diplomatic and business ties. He will today announce a number of lucrative deals for British businesses, including new jobs in Cardiff, as he begins a trade and diplomatic visit to Ankara and Istanbul, Turkey.

The Deputy Prime Minister will be joined by Business Minister Michael Fallon and a business delegation of 18 CEOs and Senior Executives from companies including Arup, Mott McDonald, AECOM, Lloyds of London and Cella Energy. Together they will discuss possible new deals and business ventures with their Turkish counterparts potentially worth up to half a billion pounds.

During his visit the Deputy Prime Minister will announce:

• Turkish company HDM Steel Pipe is to open a £7 million manufacturing facility in Cardiff, creating 38 jobs in the city with scope for further expansion in the future. The new jobs will provide employment for skilled operators, as well as administration, planning and logistics roles.

• West Midlands company Concept Steels have agreed a contract with Turkish company Vastas A. S. provisionally valued at £5 million to export alloys, exotic metals and components for the oil, gas and petrochemical industries to third markets such as Italy, Spain, Saudi Arabia and Croatia.

• Project management and construction consulting services company Hill International is to open a new Turkey and Central Asia (the Caucasus) regional office in early November 2012 as part of its efforts to secure contracts worth up to £250 million.

“It’s fantastic to be announcing new jobs for the UK and such an impressive set of deals for British businesses.

“Turkey is Europe’s seventh largest economy and is one of the worlds largest markets. My main aim this week is to ensure that more UK firms can capitalise on the economic opportunities Turkey offers.

“We have an ambitious aim to double bilateral trade by 2015. It has increased by 40 per cent since 2009 so we are making good progress towards the target, and this visit will bring us even closer.”

The Deputy Prime Minister will also sign a memorandum of understanding with Europe Minister Bağış, which will agree a project to train 350 lawyers on the judicial standards required by the EU.

• Turkey is the world’s eighteenth and Europe’s seventh biggest economy.

• Turkish GDP grew by 8.5 per cent in 2011, making the country the fastest growing economy in Europe. The Istanbul economy alone is larger than 12 EU countries combined.

• Forbes magazine (2011) states that Istanbul is ranked fourth in the world for billionaires behind Moscow, New York and London.

• Turkey has the youngest and fastest growing population in Europe with 700,000 graduates a year. It is estimated that Turkey will be in the top ten GDP economies by 2023.

• Turkey has the second largest construction and contracting sector in Europe. It is Europe’s number one TV manufacturer and bus manufacturer.