The Syrian regime and the PYD/PKK terrorist group consolidate relations 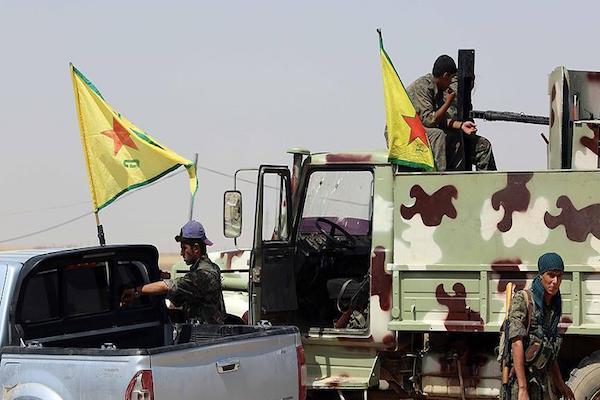 The regime supported the terror group establishing training centers in the Sheikh Maqsoud and Hellok regions of the northern province of Aleppo, said the sources, on condition of anonymity due to restrictions on speaking to the media.

A part of the Turkmen-populated area of Hellok was captured by the PYD/PKK terrorist group at the end of last year. Now the region is controlled by both regime forces and PYD/PKK elements.

Last month the regime allowed the terror group to open another “terror academy” in the northern Aleppo city of Afrin, bordering Turkey, where hundreds of terror elements have been trained by foreign trainers to use heavy weapons, bombs, and combat techniques.

The newly formed camps in Aleppo will be used for similar armed training, the sources noted.

Relations between Damascus and the terror group have reached such a high level that regime aircraft carried scores of wounded terrorists from Kobani and Afrin to the Damascus Public Hospital, the security sources said.

Moreover, two top-level PKK members at Mt. Qandil, the so-called headquarters of the terror group in northern Iraq, were also taken to the same hospital by regime planes after they crossed into Syria, they added.

The PYD is a Syrian offshoot of the PKK, a recognized terrorist group to Turkey, the EU, and U.S.

A January 2016 report by the London-based Syrian Network for Human Rights (SNHR) said that since the withdrawal of Syrian regime forces in 2012, forces of the PKK/PYD have committed significant human rights violations in northern and northeastern Syria -- including "ethnic cleansing massacres".

The group has increased its activities in northern Syria following the uprising-turn-civil war in 2011. Since then, the regime and PYD/PKK seldom engaged in conflict, but have rather forged cooperation.

Following the capture of the Al-Hasakah province from government forces in 2012, the group started to pay taxes to the government.

Regime forces and terror elements have been jointly providing the security in the city while the regime operates public institutions.

The PYD/PKK also control the Rumeylan oil field in northeast al-Hasakah along with Damascus.

The PKK, listed as a terrorist organization by Turkey, the U.S., and EU -- resumed its armed campaign in July 2015 and since has been responsible for the deaths of approximately 1,100 security personnel and civilians, including women and children.

Syria has been locked in a devastating civil war since early 2011, when the Bashar al-Assad regime cracked down on pro-democracy protests – which erupted as part of the Arab Spring uprisings – with unexpected ferocity.