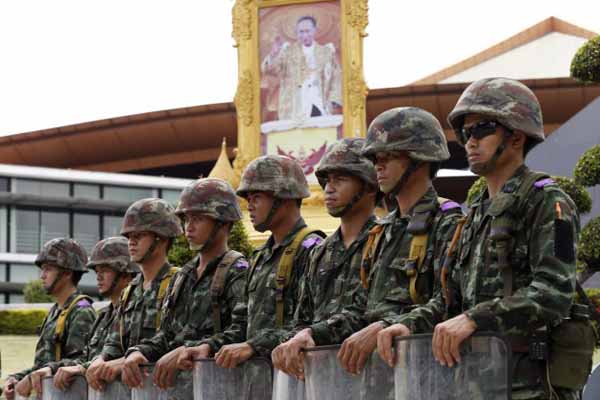 Thailand's prime minister has appointed a cabinet stacked with conservative technocrats and military officers seen as close to him, the premier - who is also the junta chief - confirming his will to maintain total control of the undergoing reform process before new elections are organized in late 2015. Of the 32 cabinet members appointed late Sunday, 11 are active military officers - including two former army chiefs. The men in uniform control the key positions of ministry's of defence, interior, commerce, justice, foreign affairs, transport and education.  One of the two important cabinet positions to go to a civilian is the finance ministry, given to Sommai Pasi, a bureaucrat who was already part of a government appointed after the previous coup in 2006. Thailand has not seen such a concentration of power in the hands of the military since the authoritarian rule of Field Marshall Sarit Thanarat at the beginning of the 1960s. Local media greeted the announcement of the line-up with dismay, the Bangkok Post calling the appointment of a military officer as foreign minister a “bad choice.” “Such a decision will deepen the skepticism that the military has an ulterior motive when it seized power other than the professed reason of carrying the major political reforms that Thailand desperately needs,” wrote the paper's Editor in Chief Pichai Chuensuksawadi.“

The confidence of key foreign counterparts is already diminished because they feel the current regime lacks legitimacy internally.”

The foreign minister position has been given to General Tanasak Patimapragorn, who is currently Supreme commander of the armed forces.

After the military seized power May 22, following a long political crisis, the United States, the European Union and Australia froze some military cooperation programs. Canberra went as far as banning Thai junta members from travelling to the country.

A junta-appointed national legislative assembly elected General Prayuth Chan-ocha as prime minister August 21. Besides his position as the government head, he is also the junta leader and army chief.

Anticipating negative reaction to the cabinet line-up, Chan-ocha tried - during his regular TV talk last Friday evening - to justify his choice of military officers close to him.

“Don’t focus on how many soldiers are in the cabinet. We can’t afford to exclude the military from the cabinet since we still have security problems,” he said.

He insisted he must have “people he can trust” around him.

The junta has promised "fully democratic elections" in October 2015 after the endorsement of a permanent constitution, which will not be submitted to a popular referendum.

Thailand's political crisis began in November when then Prime Minister Yingluck Shinawatra faced a wave of opposition protests after her government pushed through an amnesty that would have lifted the 2008 corruption conviction against her brother Thaksin, a divisive figure and ex-premier deposed in a 2006 coup.

Confronted by massive demonstrations, the government withdrew the bill, but the opposition alleged corruption by the government and Shinawatra family. Yingluck dissolved the parliament December 9 and called February 2 elections, which were disrupted by the People Democratic Reform Committee, who want an unelected "people's council" to run Thailand until the political system is reformed.

She was then herself removed by the Constitutional Court on May 7 in relation to the transfer of a high-ranking civil servant in 2011.

The May 22 coup removed the remaining ministers and dissolved the Senate, the only standing legislative assembly.