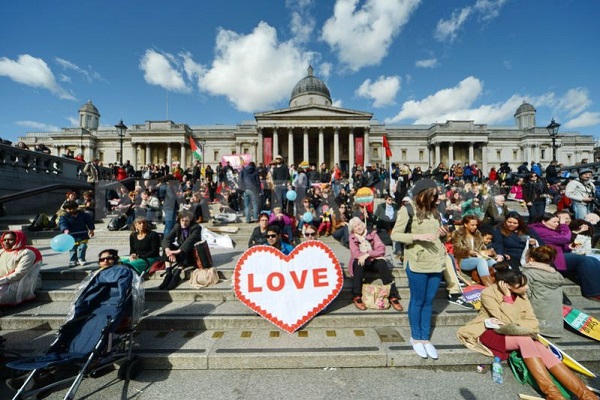 The demonstration was vibrant, positive, diverse and lively with a range

of different communities including EU migrants from Romania, Bulgaria

and Poland to Roma, Gypsy, Kurdish, Muslim, Christian and other faith

The event was a magnificent display of Britain's diversity,

multiculturalism and unity against racism and hatred.

anti-racist messages rebutting myths on immigration in between songs.

who wrote a poem opposing the Government's "Go home" vans.

Speakers at the event included DIANE ABBOTT MP who said:

"We are here today to say to the Leaders of all the parties,

Conservative, Lib-Democrats and Labour, 'no to racism and fascism'. We

want the political parties to say 'no to anti-immigrant politics'. We

don't want gutter politics in the run up to the election this May. It is

not immigrants that cause low wages, exploitative employers cause low

wages. It is not immigrants that are a drain on the NHS, without

immigrants we would not have an NHS."

"I am an internationalist and I welcome all workers to Europe. What we

have is free movement of capital, but workers cannot move around because

they are Black or Asian or they are Bulgarians. I reject that totally.

The European elections are coming up in May, vote for who you choose,

but do not vote for UKIP. I want to pay tribute to two friends we have

lost. We need more Bob Crows and Tony Benns to inspire us all."

NATALIE BENNETT, Leader of the Green Party of England and Wales said:

"I am an immigrant, but oddly enough I'm the sort of immigrant you do

sorts of untrue unfair dishonest things about immigrants and is largely

not challenged. Overall, the three largest parties are not saying 'stand

when what they should be doing is challenging him."

TOMMY TOMESCU of Alliance Against Romanian and Bulgarian Discrimination

"As the economy has worsened the rhetoric has increased against East

Europeans and other immigrants. False claims are made that Central and

East European migrants are benefit abusers, when the truth is they

contribute more than non-migrants. No one challenges these false

stories, which have led to violence, with people and their homes being

attacked. We must oppose the vicious campaigns of Nigel Farage, the

Daily Mail and David Cameron against East Europeans. We must stop the

Relatives of black men murdered in police custody including MARK

justice those responsible for the killing of their loved ones.

MAZ SALEEM, DAUGHTER OF MOHAMMED SALEEM who was murdered by a Ukrainian

attacks on Mosques, but the media and politicians did not treat him like

EDIE FRIEDMAN FROM THE JEWISH COUNCIL FOR RACIAL EQUALITY and many more.

For more coverage and pictures of the event see twitter feeds:

For interviews and more information :