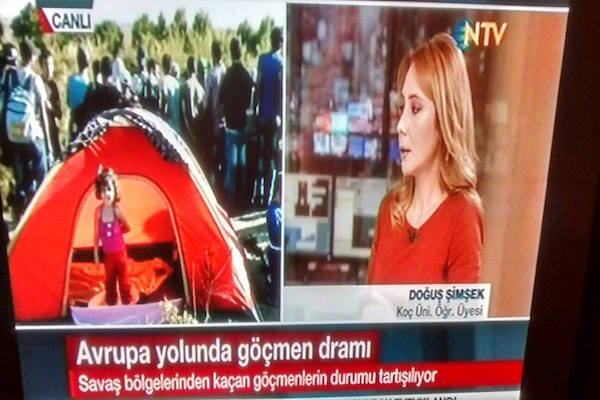 Due to the civil war in their home country, millions of displaced Syrians are trying to survive within the scope of the posited identities that the society decides upon. Although a set of regulations related to Syrian asylum seekers’ access to the substantial rights has been made, the existence of Syrian asylum seekers is still considered a temporary crisis in Turkey and the approach is far from being grounded on rights and freedoms.Syrian refugees set an example for the largest refugee flow since the second world war. According to the data taken from United Nations High Commissioner for Refugees (UNHCR) in October 2015, a total of 4,180,631 Syrians had to leave their country. Most of them have taken refuge in neighbouring countries while some did in European countries.[1]  Hence they have almost no chance to choose. Under these circumstances, Syrian asylum seekers, who constitute the newest example of the global forced migration, differ from the asylum seekers and refugees in the Europe, in terms of the reason for the asylum, the number of the refugees, the country they took refuge in and the asylum policy of that country.

Geneva Convention that was signed in 1951, defines the refugees as individuals who escaped persecution and conflict, and are unable or unwilling to return to their home countries. Therefore, people can be accorded the status of refugee in the country where they find asylum. Although Turkish constitution is based on the 1951 Geneva Convention since 1968; in the Turkish refugee law, the concept of refugees has been determined within the scope of geographical restriction unlike the definitions of the international law. That is why Turkey can grant the status of a refugee only to the citizens of the member states of the Council of Europe. People from non-member states of the Council of Europe are provided “temporary protection” allowing residence in Turkey, until they are accepted as refugees by a third country[5] in the framework of the 1994 Asylum Regulation. Syrians who sought asylum in Turkey, have been accepted as asylum seekers and the geographical restrictions have to be abolished to give them a refugee status. This situation in turn, creates obstacles related to their rights and security.

Although “Law on Foreigners and International Protection,” which was approved on April 4, 2013 and implemented in April 2014, offers a legal framework for providing the needs and security of the Syrian asylum seekers, it does not propose permanent solutions about their rights and living conditions.[6] 22 articles of the aforementioned regulation prescribe to issue temporary protection identity document to the foreigners under the title of temporary protection in Turkey in order to enable them to perform their social and legal operations. The legislation states that people with this identity document will be provided with health and education services, access to the labour market, social assistance and services.

Syrian asylum seekers living outside the camps have to find accommodation on their own.  Most of them have to live under bad and/or inadequate conditions due to the lack of financial sources. According to the Ministry of Education’s circular issued in September 2014 on the foreigners’ access to education, temporary protection beneficiaries are supposed to have access to educational services given in the schools in all cities that are inspected by the Ministry of Education and in the temporary educational centres.  In order to register to the schools or to the temporary education centres, one needs to have a residence permit, a temporary protection identity document or a foreigner identification document. However, this prevents the unregistered asylum seekers from getting access to education services.

Asylum seekers do have the right to access to health services, but to a limited extent. According to the regulation, asylum seekers are expected to afford the medical costs by themselves for the organ transplantation, prosthesis, orthesis, haemodialysis or any long term treatment of chronic illnesses. The work permit of the asylum seekers and of the refugees in Turkey is subject to the law no. 4817 on work permits for foreigners. Temporary Protection Regulation issued by the Ministry of Family and Social Policies in November 2014 states that the ones with temporary protection identity documents, namely the registered refugees are eligible to apply to the Ministry of Labour and Social Security for permit to work in the sectors, business lines and geographical regions determined by the cabinet.[7]2 In February 2015, the Ministry of Labour and Social Security asserted their plans to regulate the situation of the Syrian refugees, but no regulation has been implemented yet.

Data declared in August by the Directorate General of Migration Management under the Ministry of Interior indicates that only 262,134 people among more than 2 million Syrian asylum seekers in Turkey live in 25 refugee camps in 10 cities. 90% of the Syrian asylum seekers reside outside of the camps. Most important problems that the Syrian asylum seekers, who have to survive through their own means, face include high rental prices, being obliged to work informally due to the government policies together with being exposed to exploitation, racism and discrimination; lack of legal status and insurance, lack of medical treatment especially for those who have chronic illnesses, high medicine prices as well as lack of opportunity to send their children to the schools.

This ‘guest’ status, which includes legal gaps and does not have any international validity, also causes racist and discriminatory discourses in the society against Syrian asylum seekers apart from the restrictions on their access to basic rights. Claiming that there has been enough number of privileges given to Syrian asylum seekers and that they have to go back now, the local community attempts to lynch Syrians in several cities of Turkey.

Since the spring 2014, there have been racist attacks against Syrian asylum seekers in many Turkish cities. Syrian asylum seekers have still been exposed to attacks by local communities for various reasons such as causing housing rents to increase, pushing up the unemployment rate due to their lower wages compared to Turkish citizens, increasing the crime rate and even giving rise to traffic jam. In Ankara, there have been marches protesting the Syrian asylum seekers while their houses were burnt. They have been subject of the attacks by the racist groups in Gaziantep too. Following the murder of a Syrian asylum seeker by his/her landlord from Turkey, the local community attacked the Syrians in the streets and parks with sticks and knifes, and 10 Syrians got injured. In İstanbul’s İkitelli neighbourhood, after the claim that a woman was harassed, local residents damaged some cars, apartments and offices belonged to the Syrians. Attacks against Syrian asylum seekers have also spread in Şanlıurfa, Kilis, Kahramanmaraş, İzmir, Kayseri, Adana and Antalya.

Because of the lack of a legal status, most asylum seekers do not feel secure. In addition to this, they emphasise that they can not gain a place in the society –emotionally or structurally–, they can not find jobs, their labour is exploited because they are forced to work informally and they are having difficulties in making a life for themselves.[8]  Legal regulations must be made in order to prevent the ever-increasing and not-wanted-to-be-seen xenophobia, hatred speech, lynch attempts and racism and to ensure that Syrians maintain their lives under guarantee and they are considered a part of the society with the rights of employment, housing, education and health. Syrian refugees, against all the odds, try to live in a country whose language they do not speak.

Even though migration and refugee policies varies from one country to another, nation-states focus on controlling their borders, protecting their national identities and the citizens and limiting the services of accommodation, health and education provided to the refugees (Schuster, 2003). Recent European policies limiting the forced migration has created an international profitable business segment for human smugglers. The number of migrants losing their lives in the Mediterranean is increasing each day.  According to the official figures, while 4,077 people lost their lives on the way to Europe in 2014, in the first quarter of 2015, this number exceeded 1,500.[9] The policies of the European states, that have strengthened their border security in order to prevent the refugee flux, do not stop the refugees from their dangerous journey; people keep dying. Tragic stories of the refugees trying to go to Europe through dangerous ways due to the war in their countries, require states to make more human-centric policies rather than the ones focusing on the security and protection of borders and to reconsider the existing refugee policies.

Syrian asylum seekers whom I spoke in the context of my research, stated that beside the lack of a legal status and access to rights, they have been exposed to racism and discrimination in Turkey and this is an important reason why they want to leave Turkey. Being unable to see a future for themselves here in Turkey, Syrian asylum seekers mentioned that for four years, there had not been any progress related to the access to the rights and legal status and it is not likely that there will be such progress in the future. Most of the Syrian asylum seekers who are attempting to go to Europe to build a new life, have been living in Turkey for at least one year, while some of them said that they arrived a couple of weeks ago to escape the intensified conflicts in Syria and to go to Europe. Although they mentioned their desire to go to Europe for having access to fundamental rights such as housing, employment, education and health; they also made clear that they would be willing to live in Syria in case of the emergence of a secure environment, although they have been dreaming of Europe.[10]

Many people I met in Istanbul regard Syrians as ‘guests’ who have certain privileges rather than rights due to the government policies. They think that this visit has taken long time and now, guests should leave. As the refugee policies implemented in other countries showed before, policies that put the notion of nation-state in the centre have proven to fail. Policies, which neglect the human factor and do not put the refugees in the centre, led to increasing tension in the society. For a more egalitarian environment, Syrian asylum seekers should be accorded the status of refugee and it should not be forgotten that the right of asylum means human right.

this publication as follows: