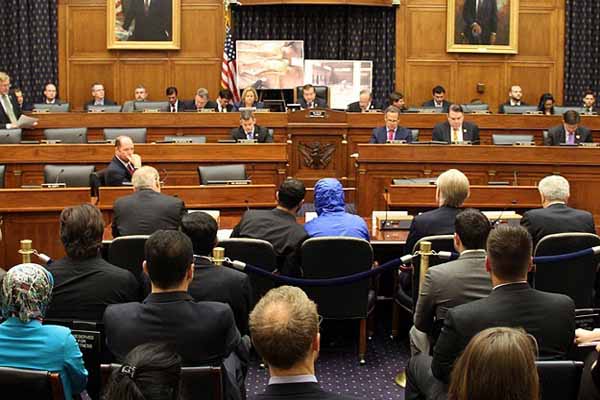 A Syrian military defector who leaked thousands of photographs documenting years of torture and death at the hands of the Assad regime briefed the U.S. House Committee on Foreign Affairs on Thursday, marking his first appearance at a public setting. There are thousands of prisoners in Syrian jails who are waiting for the same fate of those tortured, said the defector, codenamed "Caesar."  Dressed in a a blue overcoat and a baseball hat to disguise his identity, he called on the U.S. government to take action. Early in 2014, the defector leaked more than 55,000 pictures of approximately 11,000 people systematically tortured to death by the Syrian regime.  Thursday's briefing marked the first time Caesar appeared at a public setting, although he had been interviewed by an inquiry team of international lawyers and several U.S. government officials before. Constituting a significant part of the evidence of war crimes and crimes against humanity in Syria, the pictures released were delivered to the world by the Anadolu Agency along with several other news agencies in the world.