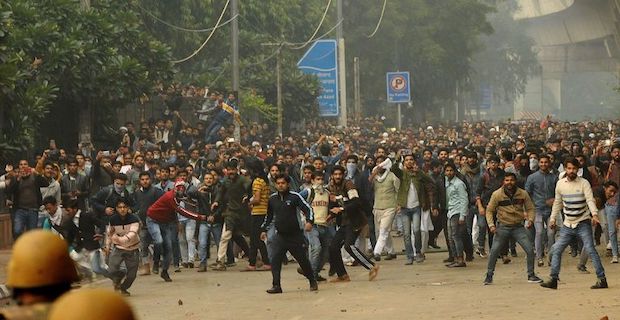 Protests by students and others have erupted in many universities across India, in support of their counterparts at Delhi’s Jamia Millia Islamia after Sunday evening violence.  Police fired teargas shells and beat students inside the campus of Jamia -- a central university -- after students were protesting against the new citizenship law, granting citizenship to non-Muslims from Pakistan, Afghanistan and Bangladesh.

Critics say the law discriminates against Muslims and is against secular principles of the constitution.

Jamia Millia Islamia, -- located in southeast Delhi and founded by Dr. Mukhtar Ansari a century ago, soon after he returned India after leading a medical mission to treat wounded Turkish soldiers in the First Balkan War – witnessed widespread violence on Sunday evening. 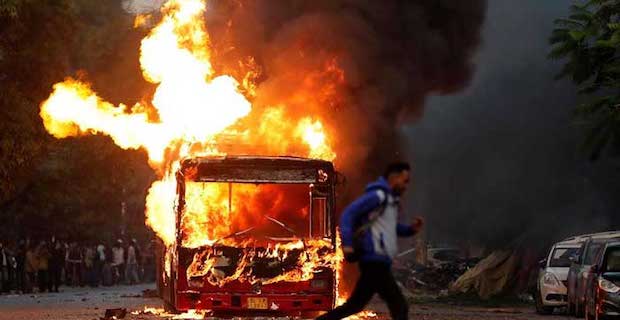 The violence has left more than 125 students of the premier central university injured, the report said.

In Delhi, thousands of people gathered outside the Delhi Police headquarters and shouted police “sharam karo (have shame),” after a protest call by the Jawaharlal Nehru University students, it added.

A group of students on Monday stood shirtless in the bone-chilling cold outside the Jamia gates to protest against the police action.

Vice Chancellor Najma Akhtar and Chief Proctor Waseem Ahmed Khan confirmed that the police had entered into the campus, without their permission.

At least 50 students have been detained by the police without any charges, said the Jamia administration on the twitter.

“Police couldn't differentiate between the protesters and students sitting in the library. Many students and staff were injured,” said the vice chancellor.

Many girl students are in a state of shock and are not in a position to speak after they were attacked by police.

Mohammad Alamullah, an eyewitness refuted reports that police had responded against violent protests. “A peaceful protest against citizenship bill was organized in the morning and had ended by noon,” he said.

Alamullah, who works as media consultant in the university, said that students were left bleeding in the library and on roads and many women hid in the bushes, as police barged into the campus late in the evening, without any provocation.

“I was in the main library along with many other students studying, when we heard firing and shrieks of people. Many students took refuge in library and nearby mosque. Police threw teargas shells inside, switched off lights and then broke door. They beat us mercilessly,” he wrote in social media.

Hundreds of students of Islamic seminary Nadwatul Ulama Institute are protesting at the main gates as the police has kept the gates firmly shut.

At many places in Mumbai, Chennai and Kanpur, students on Monday boycotted classes in solidarity with the Jamia and AMU students.

The AMU has been closed and students are being sent to their homes, said authorities. As many as 10 policemen and around 30 students were injured in a clash on Sunday evening, said NDTV.

The visuals circulated on social media show the police personal smashing bikes and firing tear gas shells on the protesting students from the main gate of the campus.

Yusuf Khan, a student from the AMU: “We are protesting against the new citizenship law, that discriminates against Muslims. You cannot discriminate on the basis of religion in this country. It is against the constitution of India,” he told to Anadolu Agency.

Keywords:
IndiaStudent Protests
Your comment has been forwarded to the administrator for approval.×
Warning! Will constitute a criminal offense, illegal, threatening, offensive, insulting and swearing, derogatory, defamatory, vulgar, pornographic, indecent, personality rights, damaging or similar nature in the nature of all kinds of financial content, legal, criminal and administrative responsibility for the content of the sender member / members are belong.
Related News