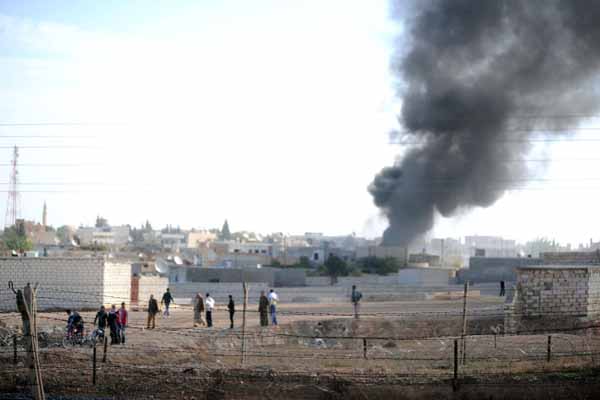 A Turkish man was killed on Saturday by a stray bullet fired across the border from Syria into the Turkish town of Ceylanpinar, security sources said. Ramazan Zeybel, 45, died in the hospital. He was the fourth Turkish citizen to be killed by stray shells and bullets fired during clashes in the neighbouring Syrian town of Ras al-Ain. With an ethnic mix of Arabs, Kurds and others, Ras al-Ain has been a focus of clashes for months, with Kurdish militias fighting for control against Arab rebel fighters from the al-Nusra Front. Two weeks ago, fighters allied to the Democratic Union Party (PYD), the strongest local Kurdish group with well-armed militias, captured Ras al-Ain from Nusra fighters. Nusra fighters have regrouped in Tel Halaf, 4 km (2.5 miles) to the west, from where they have been shelling and firing in an attempt to recoup their losses. The Kurds appear to be holding their ground. The Turkish military, which has been returning fire into Syria when stray bullets or mortars land inside Turkey, said it had fired several shots across the frontier at Ceylanpinar on Thursday night after a bullet from Syria hit the town.