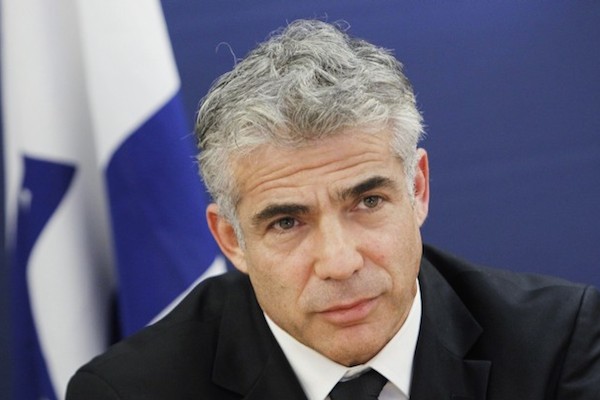 Israeli Finance Minister Yair Lapid asserted Tuesday that the recent confiscation of 4,000 dunams of Palestinian lands in the southern West Bank would be harmful to Israel.
"The decisions of annexing lands for building [Jewish settlements] like the one announced on Sunday – what good does [it do] at this time?" Lapid, who is also chairman of Israel's Yesh Atid party, was quoted as saying by Israeli daily Yedioth Ahronoth.
"It is an underhanded opportunistic move that harms Israel," he insisted.
Israeli authorities announced on Sunday the confiscation of 4,000 dunams (roughly 40,000 square meters) of Palestinian land near the Gush Etzion settlement in Hebron in the southern West Bank. According to Israeli radio, the confiscation order was taken as a response to the murder of three Jewish settlers in the West Bank two months ago.
Minister Lapid said he had been unaware of the decision, insisting it had never been put before the cabinet.
He reaffirmed his opposition to "any swift changes in the West Bank right now."
Israeli settlement building in Jerusalem and the West Bank has recently swung into full gear after peace talks with the Palestinians collapsed earlier this year.
Palestinian negotiators insist that Israeli settlement building on Arab land must stop before any comprehensive peace agreement can be reached.
International law views the West Bank and East Jerusalem as "occupied territories" and considers all Jewish settlement building on the land illegal.
About 500,000 Israelis now live in more than one hundred Jewish-only settlements built since Israel seized the West Bank and East Jerusalem in 1967.
The Palestinians want these areas, along with the Gaza Strip, for an eventual independent state of Palestine.