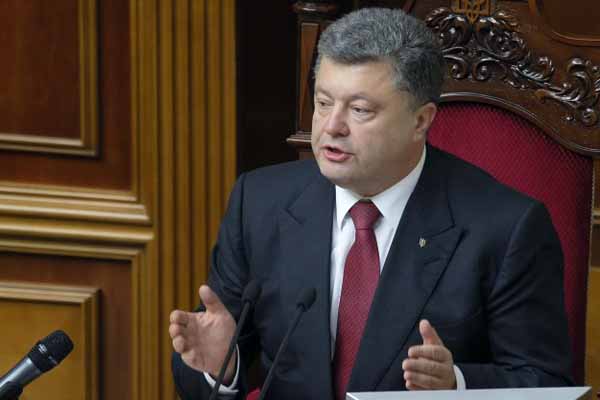 Poroshenko and President of the European Council discussed the situation in Ukraine over the phone on Monday, the eve of the Ukraine-EU discussions in Belarus, where Poroshenko will meet with Russian President. Ukraine, EU, Russia, Belarus and Kazakhstan leaders will meet in Belarus’s capital Minsk today as the tension in Eastern Ukraine reached a new high in the last few days. It is still unclear whether Poroshenko will meet Russian President Vladimir Putin separately or not. The Ukrainian president’s deputy administration chief, Valery Chalyi, told reporters last week that this meeting is an opportunity for a peaceful settlement in eastern Ukraine. Poroshenko expressed deep concern to Rompuy over Russian armored vehicles crossing over the Ukrainian border and Russia's intention in sending a so-called “humanitarian” convoy to Ukraine once again, the statement said. The fighting between the Ukrainian army and Pro-Russian separatists in the eastern regions intensified last week. Poroshenko and Van Rompuy agreed that the Ukrainian issue could become the main focus in the discussions by the EU heads of states on August 30, the statement said. The Ukrainian President dissolved parliament on Monday and announced snap parliamentary elections on October 26. Poroshenko said on television that most of the current deputies support the pro-Russian separatists, and maintain that the 2012 elections were not democratic or up to European standards.