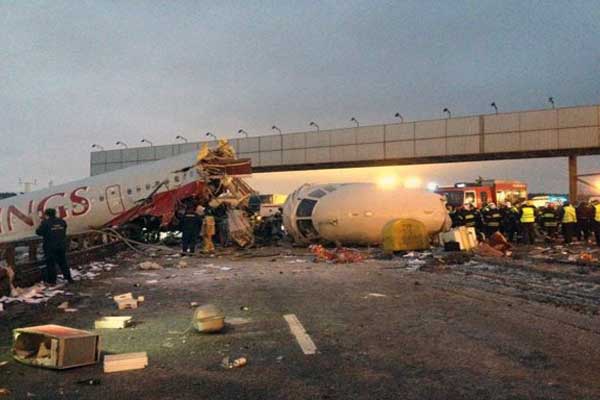 A Boeing 737 airliner crashed on Sunday in the Russian city of Kazan, killing all 50 people on board and spotlighting the poor safety record of regional airlines that ply internal routes across the world's largest nation.

The son of the president of the oil-rich province of Tatarstan and the regional head of the FSB intelligence service were named among those killed when the plane exploded in a ball of fire on hitting the runway.

Pictures showed charred wreckage scattered over a wide area, apparently taken after firefighters had extinguished the fire. Russian television broadcast a blurred video showing a bright flash of light. It also published a photo of the plane's gaping fuselage with firefighters in the foreground.

The Tatarstan airlines flight from Moscow had been trying to abort its landing in order to make a second approach when it crashed, killing all 44 passengers and six crew on board, emergency officials said.

Flight U363 took off from Moscow's Domodedovo airport at 6:25 pm (1425 GMT) and crashed just over an hour later, emergency officials said. The leased plane was 23 years old.

According to local reports, the Boeing lost altitude quickly and its fuel tank exploded on impact.

There were high winds and above-zero temperatures over the airport in central Russia. Flights to and from the airport were halted until midday on Monday.

Kazan, which is 800 km (500 miles) east of Moscow, is the capital of the largely-Muslim, oil-rich region of Tatarstan. A new runway was built at the airport ahead of the World Student Games, held in the city earlier this year.

Russia will host the Winter Olympics in the southern city of Sochi early next year.

The son of Tatarstan President Rustam Minnikhanov, Irek, was among those killed in the crash, as was the head of the regional Federal Security Service (FSB) Alexander Antonov, according to a passenger list whose authenticity was confirmed by the regional government.