WN, The FBI on Thursday released photos and video of two men it called suspects in the deadly bombings at the Boston Marathon and pleaded for public help in identifying them. 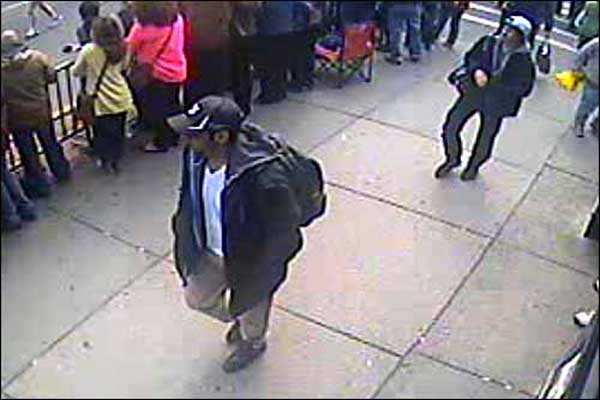 The two men were photographed walking single file down Boylston Street near the finish line of Monday's marathon before the explosions that killed three people and wounded about 180. The man identified as "Suspect 2" was seen setting down a backpack at the site of the second explosion "within minutes" of the blast, said Special Agent Rick DesLauriers, the head of the FBI's Boston office. "Somebody out there knows these individuals as friends, neighbors, co-workers or family members of the suspects," DesLauriers said. "And though it may be difficult, the nation is counting on those with information to come forward and provide it to us." But he cautioned that the men should be considered armed and "extremely dangerous." "No one should approach them. No one should attempt to apprehend them except law enforcement," he said. Anyone with information should call the bureau's toll-free number, 800-CALL-FBI (800-225-5324), he added.