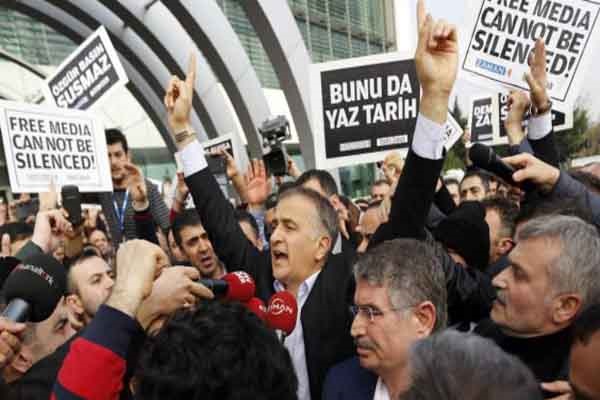 The detained journalists and screenwriters are amongst 31 people who were reportedly taken into custody on 14 December 2014 'on suspicion of involvement in an illegal organisation' following a series of police raids in the cities of Istanbul, Eskişehir and Van. The arrests have come against a backdrop of escalating political tensions between Turkey’s ruling Justice and Development Party (AKP) and the followers of Islamic cleric Fethullah Gülen. The detained journalists and screenwriters could face lengthy sentences in prison if charges are brought under Turkey’s draconian Anti-Terror Law.

The arrests have come almost a year after the controversial 17 December 2013 graft probe that implicated the sons of several high-ranking AKP ministers. The graft probe, which investigated allegations of high-level corruption in the Turkish state, has been described by the President of Turkey Recep Tayyip Erdoğan as an attempted coup by Gülenist prosecutors and police, who have also been accused of orchestrating scores of wrongful convictions in the initially AKP-backed Ergenekon and Balyoz anti-terror trials.

The 14 December 2014 mass arrests focused on high-ranking members of the Istanbul police force as well as journalists, screenwriters, producers and directors who have worked for newspapers and TV stations affiliated with the Gülen movement.

The raids on media outlets and mass detention of journalists are an extremely worrying development at a time when freedom of expression is increasingly vulnerable in Turkey. As a democracy, the government must give space to all voices in sding those of critics and political rivals. Authoritarian tactics will only serve to erode the government's standing, the freedom of its citizens and Turkey's international reputation.

It is extremely worrying to see those involved in journalism and the arts implicated in yet another politically motivated anti-terror investigation in Turkey. After so many weociety, inclulcome releases in 2014, Turkey must ensure that it does not return to filling its prisons with writers and journalists with no material links to terrorism or the plotting of violent acts.

The Board of PEN Turkey said:

We are watching with great concern and protest the force that has been used against writers, journalists and the media in recent days. PEN takes its name from the initial letters of three English words: Poets, Essayists and Novelists. When these initials are combined the word 'pen' emerges. Breaking pens should not be the business of the government.