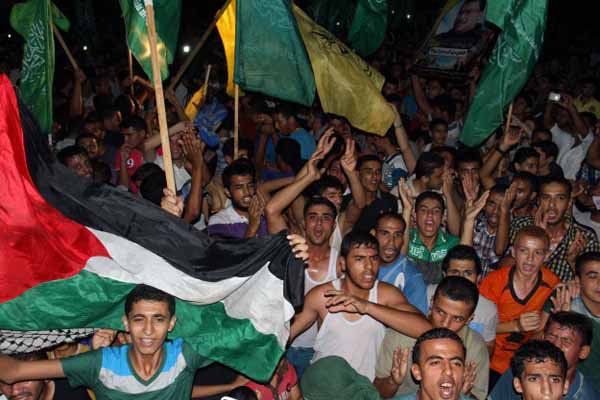 Thousands of Palestinians took to the streets across the Gaza Strip on Tuesday to celebrate a ceasefire deal between Palestinian resistance factions and Israel. Jubilant Palestinians opened fire into the air while others were seen distributing sweets. Hundreds of Palestinians taking refugee inside the Shifaa hospital in the Gaza City also fired firecrackers in celebration. An Egyptian-brokered ceasefire went into effect on Tuesday, bringing to a halt 51 days of relentless Israeli attacks on the blockaded coastal enclave. Palestinian resistance factions, including Hamas and Islamic Jihad, have called on Gaza residents to go out into the streets to celebrate their "victory". Egyptian Foreign Minister Sameh Shoukry said the deal called for the opening of all border crossings between the Gaza Strip and Israel, which would effectively signal the end of Israel's years-long embargo of the coastal enclave. The ceasefire formally came into effect at 16:00 GMT Tuesday. For the past eight weeks, Israel has pounded the Gaza Strip with the declared aim of halting rocket fire from the Palestinian territory.

Since hostilities first erupted on June 7, at least 2139 Palestinians, mostly civilians, have been killed and nearly 11,000 injured, according to the Palestinian Health Ministry.

Thousands of homes, meanwhile, have been partially or completely destroyed by devastating Israeli bombardments.

Over the same period, at least 69 Israelis – 64 soldiers and five civilians – have been killed, according to Israeli figures.

The number of Palestinian fatalities from Israel's current offensive has now surpassed the combined death toll from two previous operations against Gaza, including Israel's bloody "Operation Cast Lead" in 2008/09 in which at least 1500 Palestinians were killed over the course of three weeks.