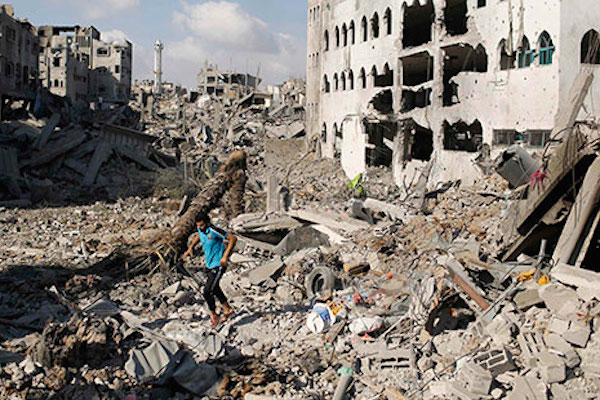 Palestinian resistance faction Hamas said on Friday that the Ramallah-based Palestinian unity government will oversee the reconstruction of the beleaguered Gaza Strip following a just-ended weeks-long Israeli onslaught.
"We unite under the choice of standing strong and rebuilding [Gaza]," Hamas politburo member Khalil al-Haya said during a Friday sermon conducted on the ruins of al-Morabetin mosque in Gaza City's battered Shujaya neighborhood. Al-Haya asserted Hamas' support for the unity government in its task of managing the entry of construction material into Gaza and rebuilding the embattled coastal enclave. He went on to say that the Palestinians "wrested their rights" from Israeli negotiators during the indirect, Cairo-hosted talks which brought an indefinite truce deal that went into effect on Tuesday.
"Palestinians still have a long way ahead to heal their wounds and rebuild what has been destroyed by Israel," al-Haya, who took part in the Cairo talks, added. Al-Hayya lost his wife and three sons, the youngest of which is five, during the Israeli onslaught, the deadliest Israeli offensive since Israel's withdrawal from the Gaza Strip in 2005.
Unveiled in June, the new Palestinian government, which aimed at ending years-long rifts between Hamas and rival Fatah in the West Bank, has yet to fully assume its duties from the Hamas-run government which remains the de facto ruler of the Gaza Strip since a 2007 violent conflict with Fatah.
Tuesday's cease-fire deal ended 51 days of relentless Israeli attacks on the strip, which saw 2,145 Palestinians killed – the vast majority of them civilians – and nearly 11,000 injured.
Over the course of Israel's offensive, at least 70 Israelis – 65 soldiers and five civilians – were killed, according to Israeli figures.
The deal also calls for opening all border crossings between the Gaza Strip and Israel – effectively ending the latter's seven-year blockade of the coastal territory. According to the agreement's terms, Palestinian and Israeli negotiators will hold indirect negotiations on other core Palestinian demands – including the release of prisoners and the establishment of a Gaza seaport – after one month.