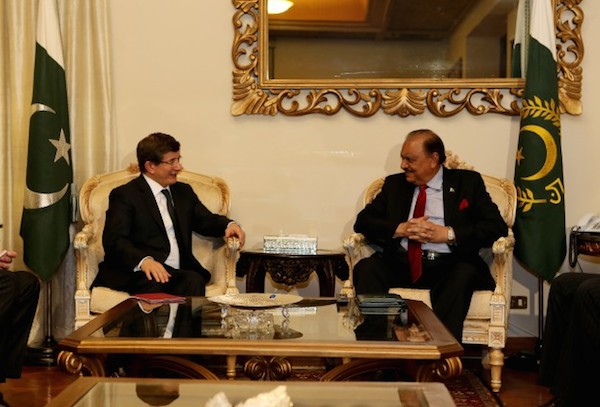 Pakistan’s president has predicted that Pakistani-Turkish relations will reach new heights under the leadership of Recep Tayyip Erdogan and Ahmet Davutoglu. In an interview with The Anadolu Agency, Mamnoon Hussain welcomed the appointment of Davutoglu, Turkey’s former foreign minister, as prime minister following Erdogan’s appointment as president.
He said: “Davutoglu is a very nice person and a great friend of Pakistan. I am sure, with these two in the saddle as president and prime minister, our relations will grow to more heights, God willing, in future.”
Hussain, who attended Erdogan’s swearing-in ceremony in Ankara on Thursday, added: “Pakistanis have a very special feeling for the Turkish people and it is a very significant thing. We can't express that feeling in words, it is such a feeling between the peoples of our two countries.
“I can express that all Pakistanis think, if something is good for Turkish people, it is good for Pakistanis. If something is bad for Turkish people, it is bad for Pakistanis too. I mean this is a special sort of feeling.”
Hussain described the presidential oath ceremony as a “great occasion for the Turkish people.”
“This is a very special occasion for the Turkish nation and I am proud to be a part of this celebration,” he added. “Mr Erdogan has left a very significant mark on the history of Turkey with his achievements in the last 10 to 12 years as prime minister.
“Whatever he has done or achieved in the last 10 to 12 years, he will achieve even more success for the Turkish people and his country as a president.”
Turning to Pakistan's relations with India, Afghanistan, Iran and China, Hussain said Pakistan strove for good relations with all its neighbors, especially India and Afghanistan.
“We want a government of and for the people of Afghanistan after the NATO forces go from Afghanistan and we want to help Afghanistan,” he explained.
The president discussed an economic corridor between Pakistan and China that will include a 4,000km highway to benefit the whole Middle East and central Asia.
Energy projects with China would help Pakistan achieve the goal of providing electricity for its whole population in the next three-and-a-half years.
Turkish firms are also working in Pakistan on infrastructure, transport and energy projects, Hussain added, inviting Turkish investors to come to Pakistan.
Hussain focused on law and order and Pakistan’s energy crisis as the “two menaces” facing the country.
“We hope that we will solve these problems with the help of friendly countries like Turkey, China and Saudi Arabia,” he said.