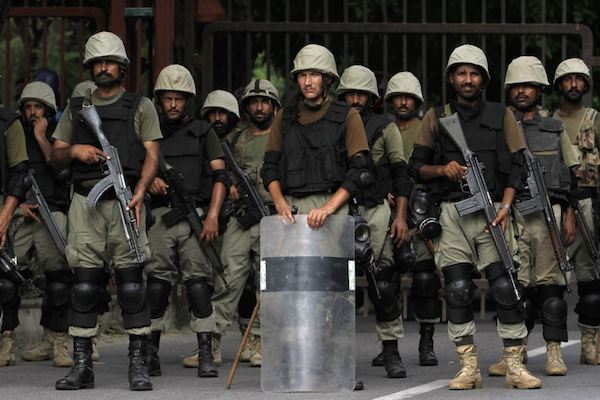 Reiterating its support to the country’s fragile democracy, Pakistan’s powerful army on Sunday urged the government and the opposition to resolve the 18-day long deadlock via dialogue. In an urgently called meeting of corps commanders headed by army chief General Raheel Sharif, it observed that use of force would aggravate the crisis, the public relations office of the army said. The corps commanders urged the government and the opposition to reach a political solution to resolve the nerve-shattering crisis “without wasting time."
The meeting was originally scheduled for Monday, but the commanders was summoned on Sunday amid speculations that the army was going to send  a terse message to beleguared Prime Minister Nawaz Sharif who is thought to be under pressure of either resigning or facing a direct military intervention. However, analysts see the corps commanders' suggestion to reach a political agreement with the opposition is a cloaked warning to Sharif. Thousands of stick-wielding supporters of former cricketer Imran Khan and firebrand preacher Dr Tahir-ul-Qadri are camping inside the parliament since Saturday night, demanding the resignation of Sharif's government. Three protesters have reportedly been killed and nearly 500 injured in massive clashes with riot police over the last 24 hours. The two leaders who set off their separate marches on Islamabad and later teamed up on August 14 demand Sharif’s resignation for alleged electoral fraud in last year’s elections. The demand has been rejected by Sharif, who is serving for the third term as premier.