Over 20 killed in Cameroon bus crash

16 others were injured in the collision 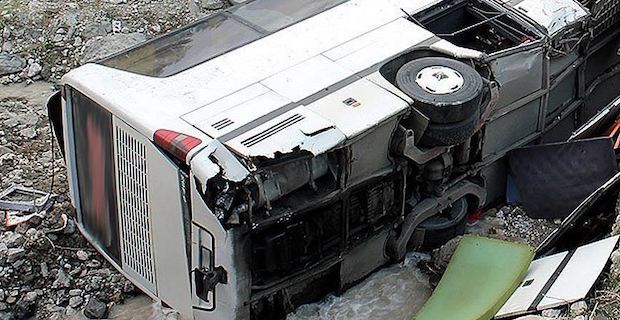 At least 21 people have been killed after a bus collided with a truck in Cameroon’s western region, officials said on Monday. "A serious traffic accident occurred on Sunday, June 23, 2019, around 3 p.m. local time (1400 GMT), in the locality of Lagoue, one kilometer from Baham in the western region," the Ministry of Communication said in a statement.

The 30-sit bus was en route to the country's economic capital Douala, from Bafoussam capital of the western region when it collided with a truck on the highway.

Authorities attribute the accident to overloading and high speed. “The 30-sit bus had thirty-seven people on board, while the driver drove at high speed beyond regulatory standards," the statement said.

The injured were transported to Bafoussam Regional Hospital for treatment.

Keywords:
Cameroon Bus Crash
Your comment has been forwarded to the administrator for approval.×
Warning! Will constitute a criminal offense, illegal, threatening, offensive, insulting and swearing, derogatory, defamatory, vulgar, pornographic, indecent, personality rights, damaging or similar nature in the nature of all kinds of financial content, legal, criminal and administrative responsibility for the content of the sender member / members are belong.
Related News