Obama to Islamic State, 'America does not forget' 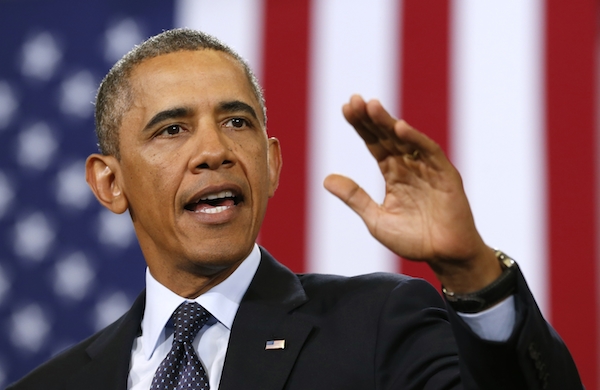 U.S. President Barack Obama vowed justice for the American journalist who was executed by Islamic State militants, one week after the video of his killing was released by the militant group.  "We have proved time and time again we will do what’s necessary to capture those who harm Americans," Obama said to loud applause while addressing the American Legion's National Convention in North Carolina on Tuesday. "Our message to anyone who harms our people is simple: America does not forget, our reach is long, we are patient, justice will be done." On Aug. 19, the terror group uploaded a video onto YouTube that has since been authenticated by U.S. intelligence to be that of the beheading of journalist James Foley. He was seized in November 2012 in northwestern Syria, and was held hostage since. Led by Abu Bakr al Baghdadi, the Islamic State, formerly known as the Islamic State of Iraq and the Levant, or ISIL, has declared a caliphate that straddles parts of Syria and Iraq, and has driven an estimated 1.2 million Iraqis from their homes. A caliphate is an Islamic state ruled by a religious and political leader, known as a caliph, or successor to prophet Muhammad. The insurgents have particularly targeted Shiite Muslims, Turkmen, Yazidis, and Christians. Iraqi and Kurdish forces have made some gains against the group with the backing of U.S. airstrikes, most notably retaking Iraq's largest dam from the militants. Eliminating the group outright, however, will likely be a longer-term commitment. "Rooting out a cancer like ISIL won’t be easy and it won’t be quick," Obama said. "But tyrants and murderers before them should recognize that kind of hateful vision ultimately is no match for the strength and hopes of people who stand together for the security and dignity and freedom that is the birthright of every human being."