Obama faces difficult talks on ending the civil war there when he meets next week with the Syrian government's most powerful ally Putin. 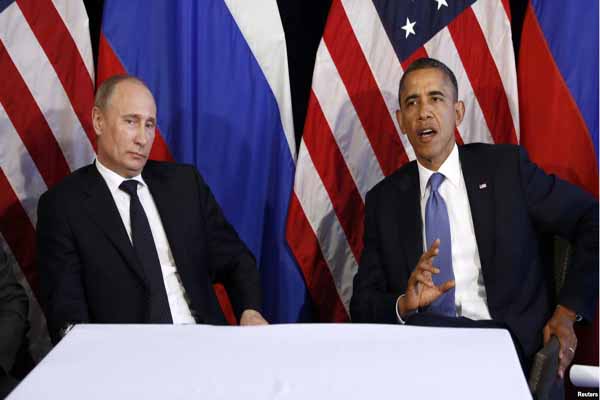 After authorizing U.S. weapons for rebels in Syria, President Barack Obama faces difficult talks on ending the civil war there when he meets next week with the Syrian government's most powerful ally: Russian President Vladimir Putin. The pair will hold their first private, face-to-face meeting in a year on Monday at the G8 conference in Northern Ireland, the White House said on Friday. Obama will focus on finding common ground with Putin on talks toward a political settlement in Syria, said Ben Rhodes, the White House deputy national security adviser. "There are no illusions that that's going to be easy," he said. Obama will discuss U.S. evidence that Syrian President Bashar al-Assad's forces have used chemical weapons - crossing what the American president has called a "red line" in the 2-year-old civil war, the White House said. Syria is Russia's only ally in the Middle East and Moscow has frustrated the United States by its diplomatic support for Assad and its threats to send S-300 anti-aircraft missiles that could prevent the establishment of a Western no-fly zone in Syria.

Working to overcome mistrust between them, Moscow and Washington are trying to set up a Syrian peace conference in Geneva next month.

Russian Foreign Minister Sergei Lavrov has told Secretary of State John Kerry that U.S. accusations of chemical weapons use by Assad's forces "are not backed up by verified facts," the Russian foreign ministry said on Friday.
Lavrov also warned that U.S. military support for Syrian rebels could escalate violence, it said.

Obama's authorization of U.S. weapons to Syrian rebels is likely to upset Putin.

In a series of comments on Tuesday that ranged from criticism of America's dropping of the atomic bomb in 1945 to its treatment of Native and African Americans, Putin accused Washington of supporting protests that have seen thousands take to Moscow's streets.

Russia has been particularly exasperated with U.S. Ambassador Michael McFaul, who has built deeply close links with dissident groups. It has complained repeatedly about foreign and particularly U.S. funding of activist groups and kicked out the U.S. Agency for International Development.

In an apparent move to irritate Washington further, Putin said Russia might be willing to consider a plea for asylum from Edward Snowden, who leaked surveillance secrets from the U.S. National Security Agency.

The Obama administration is reluctant to become more involved in Syria, set up no-fly zones or put its own troops in. Russia's intransigence is seen by some as providing justification for limited action.

"What we're seeing here is another sign of a move to a much more multipolar world," said Nikolas Gvosdev, professor of national security studies at the United States Naval War College. "It's about countries like Russia putting certain states such as Syria off-limits for U.S. intervention. If you're going to get things done in the modern world, you're going to have to get great powers to work together."