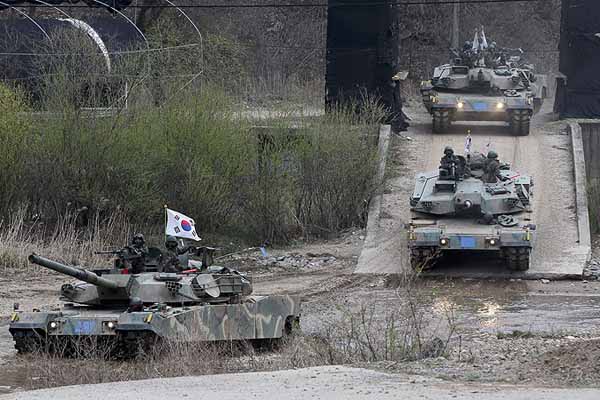 North Korea has reportedly moved two more missile launchers to its east coast, where preparations have apparently begun for a missile test as tensions continue to simmer on the peninsula. The North had said before fresh reports of the missile move emerged on Sunday that it was willing to discuss disarmament but rejected a US nuclear condition for talks. Expectations had been high that Pyongyang would carry out a test to coincide with celebrations marking the birth of North Korea's late founding leader Kim Il-Sung on April 15 but it did not materialise. The North's military moved two launchers believed to be for scud missiles to the northeast province of South Hamgyong last week, according to South Korea's Yonhap news agency, which cited a senior Seoul official. "We have discovered the North has moved two additional TELs (transporter erector launchers) to the east coast ... after April 16," the official was quoted as saying. The official said Seoul and the US were closely monitoring the site.

A spokesman for North Korea's defence ministry was not immediately available to confirm the report.

The North was previously reported to have moved seven missile launchers to its coast facing the East Sea, or Sea of Japan, in apparent preparations for a test that would further escalate tensions.

Angered by fresh UN sanctions triggered by its third nuclear test in February, and joint South Korea-US military exercises, the North has for weeks been issuing threats of missile strikes and nuclear war.

But despite the passing of the Kim Il-Sung anniversary, a Seoul defence ministry spokesman said on Thursday that the possibility of a test involving shorter-range Scud, mid-range Musudan, or long-range Rodong missiles remained.

April 25 could be another possible date for a missile launch, the report said, quoting military officials in Seoul. The date is the founding anniversary of the North's military.

The Musudan, seen as most likely to be tested, has an estimated range of 2,500km to 4,000km. That is enough to reach South Korea, Japan and potentially US military bases on the Pacific island of Guam.

US President Barack Obama has expressed doubt over the North's capabilities and said last week that he did not believe Pyongyang could yet arm a missile with a nuclear warhead.