Nine dead and many injured at apartment block in Paris

Nine people including a baby have died in a fire at an eight-storey building in south-western Paris, fire service officials say. 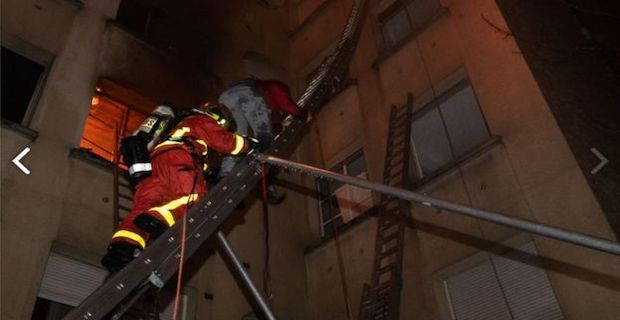 More than 30 people - including six firefighters - were injured. One person is in a serious condition.

Fifty people were evacuated by ladders from the blaze in the upmarket 16th arrondissement.

The Paris prosecutor says it may have been deliberately started. Police have detained a female suspect.

French President Emmanuel Macron said that the country "had woken up to tragedy", and praised the fire services for their courage.

The fire spread across the two floors of the 1970s building on Erlanger street shortly after 01:00 (00:00 GMT), forcing some residents to scramble on to nearby rooftops to escape the flames and smoke.

An eyewitness at the scene told France Télévision:

"The fire alarm went off at 00:30am a little after midnight, and smoke was everywhere already. I live on the 8th floor, the top floor, so I tried to pass from balcony to balcony to get away, And then, we huddled up in a corner, other people climbed up to where I was to escape the flames."

About 250 firefighters were deployed to the scene not far from the Bois de Boulogne park, helping to rescue those trapped on the roofs. Pictures showed flames coming from the top floor windows and firefighters in breathing apparatus scaling ladders to reach residents.

"When we arrived, we were faced with an apocalyptic situation. Lots of people were calling for help from the windows", the spokesman said.

Six firefighters are among the injured, reports French broadcaster BFMTV.

The fire was brought under control after a five-hour operation, but the death toll could still increase, a fire service spokesman told the AFP news agency.

Nothing of the fire is visible from the end of the street, which has been sealed off, the BBC's Hugh Schofield reports from Paris.

Firefighters says this complicated their task because they could not use their vehicles. The courtyard also acted as a funnel, helping the flames to spread from the lower to upper floors. Neighbours are being quizzed by journalists.

Surrounding buildings in the area have been evacuated as a precaution. Town hall officials have been tasked with finding alternative accommodation, reports Le Parisien newspaper.

How is the inquiry proceeding?

An investigation has been opened into the criminal charge of causing death by arson, AFP reports.

French media say the woman is suspected of trying to set fire to a car parked near the building after a row with a neighbour.

Paris Prosecutor Rémy Heitz said the suspect had been known to psychiatric services.

The mayor of Paris, Anne Hidalgo, has sent her condolences to the victims, and is on her way to the site, along with Interior Minister Christophe Castaner.

Just a few weeks earlier, four people were killed after a huge blast at a bakeryin the centre of the city.

Keywords:
Paris Fire
Your comment has been forwarded to the administrator for approval.×
Warning! Will constitute a criminal offense, illegal, threatening, offensive, insulting and swearing, derogatory, defamatory, vulgar, pornographic, indecent, personality rights, damaging or similar nature in the nature of all kinds of financial content, legal, criminal and administrative responsibility for the content of the sender member / members are belong.
Related News