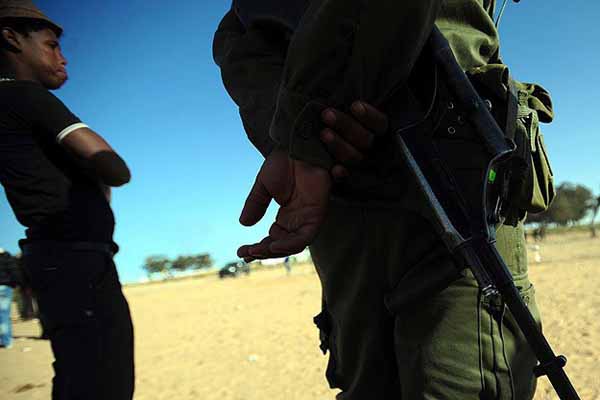 "The military had a tough battle with the terrorists today, but the tally appears to have favored Boko Haram, which now controls much of Gamboru-Ngala," Banu Othman, a local resident who claims to have fled the scene of the fighting, told Anadolu Agency. "There were casualties on both sides; some of our people were caught in the crossfire," he said. Adama Idrissa, a member of a local vigilante group, confirmed the incident, which, he said, had left "several people dead on both sides and millions of naira worth of property destroyed." An army officer, too, confirmed the violence, but said military operations in the area were ongoing. "There was an air raid on the town today. Many of the terrorists died, but our men withdrew later," the officer, speaking anonymously because he was not authorized to speak to the media, told AA. "But then a large batch of terrorists who had retreated suddenly came back," he said. "We are still battling them." He added: "It may be hasty to paint the picture of anything for now."

It was the second time for the two sides to clash in the strategic town in less than a year.

Boko Haram's control of the town gives militants room to smuggle arms and to enter and exit both countries unchecked.

For the Nigerian government, it means the loss of a strategic area from which to check cross-border attacks.

Reports of the fighting at Gamboru-Ngala came hours after claims that hundreds of Nigerian soldiers had fled to Cameroon – a development said to have been confirmed by the latter country.

Nigeria's military has yet to comment on either of the reported incidents.

Defense spokesman Chris Olukolade, for his part, did not respond to AA's enquiries.

If the capture of Gamboru-Ngala is confirmed, it would bring to four the number of key towns in Nigeria's northeast taken and administered by Boko Haram.

The other three are Gwoza in the restive Borno State, Buni Yadi in Yobe State and Madagali in Adamawa State.

The militant group also controls a number of small villages throughout these vast territories.

Boko Haram leader Abubakar Shekau, in a video posted on Sunday, proclaimed Gwoza to be part of an "Islamic caliphate" – a claim already rejected by the military.

It is the first time since Shekau launched his violent campaign in 2009 that he has used the term "Islamic caliphate."

Shekau did not say whether his caliphate was part of that recently declared by the so-called "Islamic State" in parts of Iraq and Syria.

Nigeria is battling a five-year-old insurgency that has defied almost two years of intense military operations aimed at flushing militants from the country's northern region.

The northeastern states of Adamawa, Borno and Yobe have all remained under emergency rule since May of last year.

Boko Haram became violent in 2009 after its leader, Mohammed Yusuf, died in police custody only hours after being captured along with a handful of lieutenants.