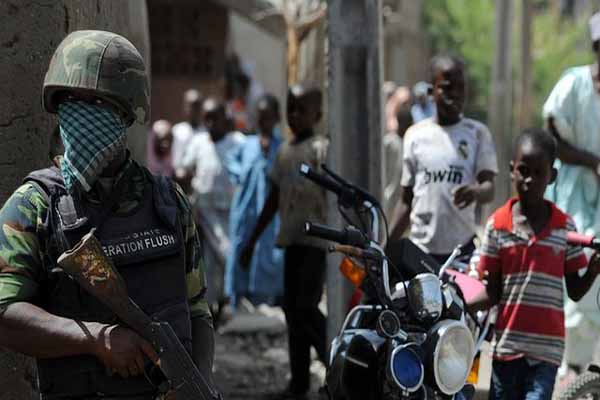 Maiduguri, capital of Borno state, has been an important base for Boko Haram Islamist militants. A statement named 11 areas of the city which would now be under permanent curfew. Also on Saturday, the military said 65 "terrorists" had been arrested as they tried to infiltrate Maiduguri. It said those arrested had been "fleeing from various camps now under attack". However, there has been no independent confirmation of the claim. A state of emergency is currently in force in Adamawa, Yobe and Borno states.

"In order to sustain special operations in the face of recent Boko Haram attacks, [a] 24-hour curfew is hereby imposed in the following wards," a military statement said.

Correspondents say the neighbourhoods listed are considered strongholds of Boko Haram. The whole of Maiduguri was already subject to an overnight curfew.

Witnesses said troops were stopping lorries from entering the city.

The army said 10 suspected insurgents were killed in clashes with troops in Maiduguri on Friday and weapons were seized including rocket-propelled grenade launchers.

Nigeria recently launched its biggest offensive against Boko Haram since the group began its insurgency in 2010.

One plane was hit by anti-aircraft fire but officials said it had returned to base safely while the "terrorist base" was "completely destroyed".

It was the first report of Boko Haram using anti-aircraft weapons.

Also on Friday, US Secretary of State John Kerry urged the Nigerian army to show restraint and not violate human rights as it pursues the militants.

Mr Kerry said there were "credible allegations" of "gross human rights violations" by the Nigerian military.

The BBC has also received reports of civilians fleeing remote areas in Borno State and arriving in towns on the border with Cameroon.

More than 2,000 people have died in violence in Nigeria since 2010, most of which is blamed on Boko Haram.

The group, whose name means "Western education is forbidden", says its quest is to overthrow the Nigerian government and create an Islamic state.

There has been growing concern that Boko Haram is receiving backing from al-Qaeda-linked militants in other countries.