At least 28 people were killed and 90 others were injured in multiple explosions at an airport and a metro station in Brussels on Tuesday morning, Belgian media reported 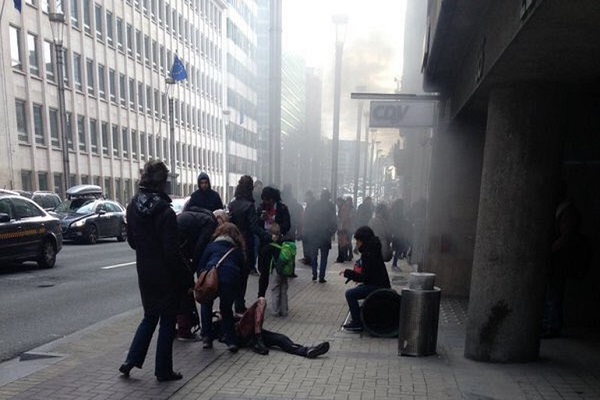 BRUSSELS (AVRUPA TIMES)-At least 28 people were killed and 90 others were injured in multiple explosions at an airport and a metro station in Brussels on Tuesday morning, Belgian media reported.

The first two blasts were reported at Zaventem airport, where at least 13 people were killed and 35 others were injured at around 8 a.m. local time (07.00GMT), according to Belgian public broadcaster VRT.

According to local media, initial reports suggest the Brussels airport attack was carried out by a suicide bomber.

Shortly after, a separate explosion hit the Maelbeek metro station in central Brussels, which is located close to several European Union buildings in the city.

Spokesman for the STIB-MIVB metro company, Guy Sablon, told media in Brussels that 15 people were killed and 55 others were injured in the Maelbeek attack.

The attacks occurred during rush hour in the city when thousands of people use public transportation.

Also, the terror threat level in Brussels has been raised to the highest, local media added.

All metro stations have been closed and flights to the Zaventem airport have been diverted. The high-speed railway service Eurostar has also cancelled all trains to and from Brussels, it added.

People in Brussels have been advised to restrict their movements. Belgian Prime Minister Charles Michel tweeted: "For now, we ask the population to prevent movement."

The explosions come just four days after a counter-terrorism raid in Brussels led to the capture of Paris attacks suspect Saleh Abdeslam on Friday.