'Migration is good for Europe'

Kemal Karpat, 91, says he does not know what country he belongs to because "he feels home wherever he goes". 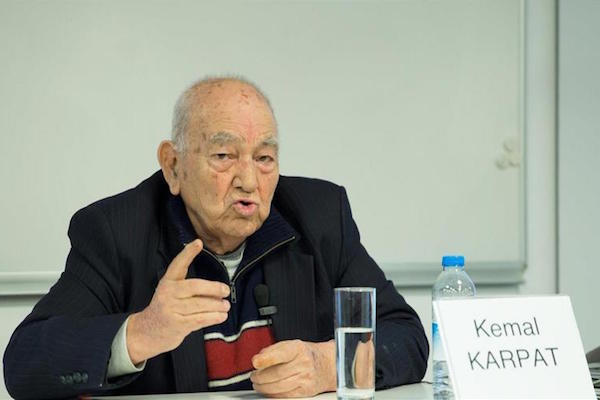 ISTANBUL(AVRUPA TIMES)-Kemal Karpat, 91, says he does not know what country he belongs to because "he feels home wherever he goes". "I have been a migrant all my life," he says, holding his cane in one hand while stretching his ear with the other to be able to hear more clearly. A renowned Turkish scholar and author of at least a dozen books on Ottoman history and political science, Karpat was born in Romania in 1924 but spent his entire life living in both Turkey and in the U.S. to pursue his decades-long career in academics.

"I don’t know [what it feels like] to live 100 percent in one country," says Karpat, who was a lecturer in social sciences at numerous American universities, including New York University, Princeton, Harvard, John Hopkins University and Columbia.

"Everywhere I go is home, yet none of them is home," he adds.

"But if you ask me, I feel at home in any country I live in," Karpat says following a conference at an Istanbul university on Wednesday. "I go to Romania where I was born [and] I feel perfectly at home there [and] one day after I arrive in Turkey, I forget that I lived elsewhere."

As numerous European countries have implemented measures to stem the flow of migrants and refugees as much as possible, Karpat has said he perceives migration as a positive phenomenon for societies.

"Fundamentally, migration is good for Europe because it provides Europe with manpower," Karpat says. "The population of western Europe is decreasing or not growing enough to supply the need for manpower."

"Germany has accepted [...] 1 million refugees, why? Because Germany needs labor," he adds.

He gives examples of success stories involving people with migrant backgrounds, including the world’s richest man, Carlos Slim, Mexican businessman who is the son of a Lebanese migrant, and Apple's co-founder Steve Jobs, who was the son of a Syrian migrant.

In 2015, a rising number of migrants -- mostly Syrians -- fleeing war and persecution back home, began in making the dangerous journey to Europe, which is now facing the worst refugee crisis since World War II.

"Europe has not been prepared to receive such a big number in a short time," Karpat says.

In February, the EU's migration commissioner Dimitris Avramopoulos warned that Europe's Schengen borderless zone "would completely break down" unless the 28-nation bloc took measures to stem the migration and refugee flow.

"Instead of acknowledging its shortcoming and taking measures to repair them, [Europe] has started an anti-migration, anti-Islam [and] anti-foreign campaign," Karpat says, referring to a rise in far-right and anti-immigrant parties across Europe.

Hungary’s prime minister Viktor Orban has said he wants "zero migrants" in his country, which has built razor-wire fences on its southern borders to stop migrants from passing into other European countries.

Slovakia’s government last year announced that it would take in 200 Syrian refugees but that they had to be Christian.

Karpat says there is a "fear in Europe" that the growing number of migrants will disturb its social order, customs and traditions.

He says this "fear is absurd" because the approximate 1 million migrants that entered Europe in 2015 is significantly less compared to the more than 700 million people residing in the continent.

"Unfortunately, it is a human phenomenon that the newcomers are always ill-regarded by the old inhabitants of an old population," Karpat says.