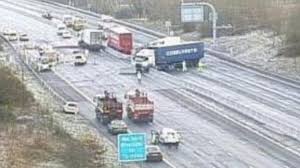 One person has been killed and a section of the M25 closed following a major accident involving multiple lorries crashing through the central reservation. Essex Police confirmed there had been one fatality following the incident near Waltham Abbey at 1.50am this morning. Three others have been taken to hospital after it was reported that “a number of people” had been trapped in their vehicles.

It said the section of the ring-road would remain closed until the afternoon. A spokesperson for Essex Police said: “The M25 currently remains shut between junctions 25 and 27 while clean-up and repair work continue. Police have now released the scene to the Highways Agency.”

Transport for London said the closures were having a knock-on effect on the A127, A10 and A12, where traffic remained “very slow”.