300,000 Turkish Cypriots are denied any fundamental rights under the European Union 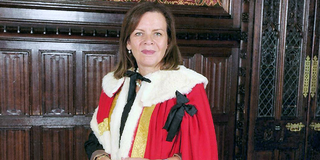 Liberal  Democrat peer Lord   Sharkey,   Chairman of  the UK's   All-Party  Parliamentary  Group for the  Turkish  Republic  of Northern  Cyprus,  challenged  the  UK government 's knowledge of    everyday  economic  reality in  the  KKTC  last  week (16/10/2013) when he  put a  question in  the  House  of  Lords  to  Baroness  Warsi,  Senior  Minister at  the  Foreign and Commonwealth  Office.

Lord  Sharkey  asked  Baroness  Warsi "what assessment  Her  Majesty's   government  have made of  the  exclusion of  those living  in  northern Cyprus   from the  benefits of  that island's  membership of  the  European  Union ". The  1960   Treaty of  Independence appoints   the  UK  a  Guarantor of  the interests  of  both  the  Turkish and  Greek  communities on  the  island.

Answering for  the  government,  Baroness  Warsi   said: " We  endorse  the  European  Council conclusions  of  2004  by  which  the  Council  undertook to end the isolation of  the Turkish  Cypriot  Community, including  through much-needed  assistance  programmes. The  best way for  all  Cypriots to enjoy  the  benefits  of  EU membership  would be  through a  comprehensive  settlement of  the  Cyprus  problem. We  continue to support the leaders of  both  communities in their  efforts  to  achieve  this,  and  we  hope  that the  UN-led  negotiations  will  restart and  succeed in the near  future,"

2004 was  the  year  that Turkish  Cypriots   were  encouraged  to  vote  for  the  UN's Annan Plan  solution to  the  island's  division, with  a  promise  that  trade  and  other embargoes would be lifted if they did so. Although   Turkish  Cypriots    overwhelmingly  voted  for  Annan, those  embargoes  have never been lifted.

Lord  Sharkey  then drilled  down with a second  question about how  the  UK  government  could give  practical help,in advance of  any comprehensive  settlement :"My  noble  friend  will know  that meat  and  dairy products  are the economic mainstay of  northern  Cyprus, but they are banned from the EU simply because  there is no  recognised  body in northern Cyprus to certify them as safe,  although  they are safe. Will the  government look at  arranging some form of  bilateral certification arrangement  that would allow such products to be sold in  the  UK?"

Baroness  Warsi  replied::  "I  cannot  comment  on my noble  friend's  specific  request, athough if there  is  any  ongoing   work in  the  area of  food, I will certainly  write  to him.  As he  will be  aware, many of  the  rights  and  obligations  that  came  with the membership of  the   EU  do not  apply in  the  north of  the  island, but  the  EU  has  been working  with representatives from the north  to make sure  that programmes  are  put  in place  for  eventual  reunification and membership of  the  EU."

Lord  Hannay  (the UK's  Special  Representative  for  Cyprus to the  UN, 1996-2003)  then asked  about the number of  Turkish Cypriots  working in  Brussels:"Can  the noble Baroness   tell us  how many  Turkish  Cypriots  are  members  of the  European  Institutions - the  Commission,  the  Parliament, and  so on?  If, as I suspect, the answer is zero, does she not agree that it is odd  that people who are regarded  as  citizens of the  European Union  cannot be recruited to its  institutions? "

Baroness  Warsi replied: "The  noble  lord  is  aware  of  the  ongoing  challenges  in the  area. I presume that he is correct, but that if he is not, I am sure that I will write to him with details of how many citizens from the north of the country are members  of  European Union institutions.

"I come back to the basic point in this matter.The way to resolve  these  issues in the long  run us by achieving a  settlement.There is some hope of  that..As noble Lords will recall , the  current  President, Nicos  Anastasiades, was one of  the  few  politicians  (Ed :in the south ) who was supportive  of the  Annan  plan  during   the  2004  referendum. There is therefore  some  hope  that  negotiations  will resume  and  will proceed in a  positive  way."

But  Baroness  Meral Ece   was  not  satisfied: "My Lords, perhaps  I may press  my noble  friend  a  little  further  on  this. If, as she  says,  the  United  Kingdom as a  guarantor power  has a legal responsibility to recognise and support the  Turkish  Cypriot  Community, why does it appear  that the EU  border  seems to end at the  Green Line, so that  300,000 Turkish Cypriots  are  denied  any fundamental rights under  the  European  Union?"

Baroness  Warsi replied:"  My noble friend is a  real  expert on these issues,so I shall not  seek  to  question her  assertions, but she will be  aware  that the  European Commission directly implements  aid programmes in the north of  the  country.  These  social, economic  and  development  programmes  are  specifically  for  the  Turkish  Cypriot  Community..  She  will also be  aware  that if  Turkish  Cypriots   take  Republic  of  Cyprus  passports,  they can access  some of  the  wider  benefits that come  with EU membership".

Fevzi  Hussein, recently  re-elected  as chair  of  Embargoed!, a  pressure  group dedicated to lifting the embargoes suffered by  the  TRNC,  comments "The UK, as one of the guarantors of Cyprus, must be seen to be doing more to help Turkish Cypriots caught up in decades of embargoes. I welcome and thank those peers who posed the questions which show they have ALL Cypriot interests at heart. Sadly, Baroness Warsi's answers demonstrate the non-commital manner in which this government views the Cyprus Problem. The bottom line is, there is geo-political instability in the Easter Mediterranean, there is an economic crisis in the South of Cyprus and on top of all of this there is reportedly an abundance of natural resources in the sea which ALL Cypriots must benefit from. This is a cocktail of nuances which could pave he way for cautious optimism but our government here has to open its eyes and smell the coffee."