Libya govt says its ministries' HQs 'out of control' 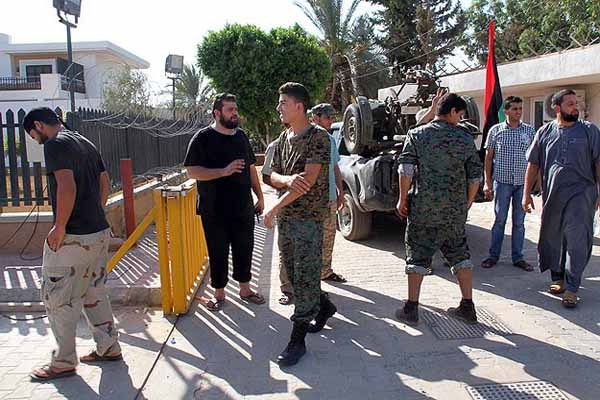 Libya's interim government has said that most of its ministries' headquarters and other offices are out of its control after having been occupied by militants who denied entry to its employees. In a statement late Sunday, the government said its ministers and senior officials had faced threats and it is deemed "dangerous" for them to go to work. Last month, the Libya Shield, which is widely seen as a pro-Islamist militia, managed to take control of several strategic facilities in the Libyan capital after heavy fighting against rivals Al-Qaaqaa and Al-Sawaaq militias.  The government, in its Sunday statement, said that several armed groups – without naming them - had threatened the government's top officials and even attacked their homes. "All these violations would be investigated and a legal action would be taken" against the perpetrators, the statement noted. It added that it would continue assuming its duties until a new government is formed – in reference to the resignation submitted by the government en masse to the recently-elected parliament on Thursday.

In its announcement of the resignation, the government cited the recent fighting in Tripoli between rival militias and condemned "attacks against homes and residents" there, even without blaming a specific party for these attacks.

A day earlier, six ministers in the interim cabinet resigned in protest over what they describe as government bias toward a "certain party" to the country's current conflict – without specifying the party in question.

Since mid-July, the Libya Shield on one side and Al-Qaaqaa and Al-Sawaaq militias on the other have been locking horns in and around Tripoli, almost totally destroying the airport and wreaking havoc in the flashpoint city. The fighting left dozens dead and hundreds injured.

Libya in general has been plagued by recent fighting between a loosely organized national army and local militias that held onto their weapons following the ouster and death in 2011 of long-ruling strongman Muammar Gaddafi.

Libya's new parliament recently assumed legislative authority from the General National Congress, the mandate of which expired earlier this year.

However, the outgoing General National Congress reconvened on Monday, citing constitutional violations by the elected parliament, and tasked Omar al-Hassi with forming a government of "national salvation."