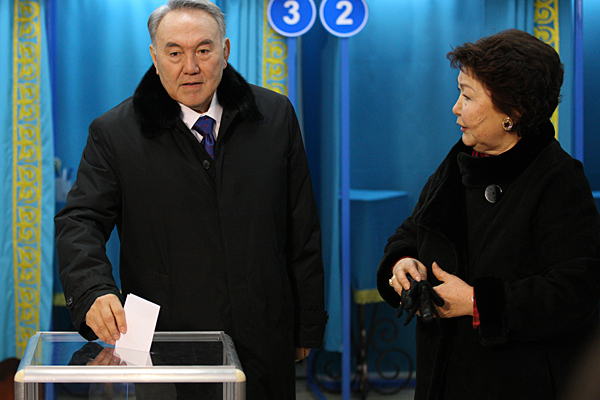 AVRUPA TIMES-Alibek Razakov, Counsellor of the Embassy of the Republic of Kazakhstan to the United Kingdom of Great sent an article on the upcoming elections in Kazakhstan. He says:

"Early elections to the Majhilis (the lower chamber of Parliament) of Kazakhstan appointed on 20th March 2016 including the re-election of the maslikhats’ (local representative body) deputies at all its levels. I recall the initiative of termination of deputy powers ahead of time offered by the majilismen (members of lower chamber of Parliament) themselves, arguing its decision for three reasons: the implementation of its mission, the savings in combining the two electoral races and the need for an infusion of new forces in the country's parliament.

And now we shall understand the specific. What does "fulfilled mission" mean? The deputies have counted that within 4 years of theirs work in the Majilis there have been adopted 460 bills. Among them, for example, were those which primarily needed for a large-scale of reforms and upgrading. The laws are related to almost all spheres of public life such as the manufacturing sector, agriculture, security and the activities of state bodies. Accepted bills tomorrow will bear fruit, there is no doubt. Because laws have been carefully worked out, have been studied, were investigated a number of international laws to settle such moments of crisis. Therefore, this decision is very correct, as noticing many experts and politicians.

The second argument is – saving the money. The central committee of the election has estimated how much it will cost a combined electoral process. It turns out that the election of deputies to the Majilis and maslikhats of all levels will cost to the republican budget about 8 billion tenges. At the same time during the two electoral processes appreciation would amount to 4.8 billion tenges. With regard to the election funds, here are economical choices: means for propaganda and other electoral needs are not allocated from the budget, the election funds formed by parties of their own. Moreover, every political association wishing to participate in the elections, as well as the Maslikhat’s candidates must deposit a certain amount to the central electoral commission of Kazakhstan. This money is not being spent, they are on deposit account. And returns to those who pass the 7% barrier. If the party has passed the 7% barrier election fee is returned back to the party. If the candidate became a deputy, he also returned to the election contribution. In all other cases, the money from the deposit goes to the republican budget. To date, the country has registered seven political parties: "Nұr Otan", "Aқzhol", "National Social Democratic Party", “the Communist Party of Kazakhstan”, "Birlik", "Aul" and "Azat". Each party may nominate a maximum of 127 candidates and pay the election fee have also, for each 15 times the minimal wage. Candidates to maslikhats are necessary to pay 5 times the minimal wage, in the case of a decision to run for the upcoming elections.

The third argument, that motivated the former Majilismen initiate early elections - the need to diversify the composition of Majilis. It is understood that the Parliament needs new forces and ideas."

"This campaign will be active, intense, and there will be some interesting programmes from political parties. It is very important that more political parties were represented in the Majilis of the Parliament, particularly in terms of representation of the population. Today in Kazakhstan, and beyond a difficult economic situation. The decline in global commodity prices, the collapse of the US and Chinese stock exchanges, economic sanctions against Russia dictate new rules. Creative ideas in the legislative branch, and indeed, will soon be at a premium. In this sense, the party has not yet happened in the status of deputies of the Majilis are already preparing their programs. Most already planned party conventions, which will be determined and pre-election platform and the nomination of candidates is planned.

At the same time the party has scored the "field" experience counting on a greater number of parliamentary seats. "Judge for yourself if we were on the previous elections on an equal basis with other parties, we did not have political experience, such as now, had no experience of parliamentary activity. And now we have earned experience, I believe that the conspicuous. We plan to take the maximum number of seats. Maximum - 15 people ", - shares his predictions Communist Vladislav Kosarev, deputy of Majilis of Parliament of Kazakhstan 5th convocation.

By the way, with regard to renewal of the Majilis, the political analysts and experts suggest the parties to pay attention to young people, especially to the "Bolashakers". Over the history of Kazakhstan's independence thousands of young professionals have educated in many prestigious Western universities. In the age of globalization and integration in all areas the knowledge of such people would benefit the country. Especially when you consider that the graduates of "Bolashak" scholarship are aware how the economic laws work in the developed world allowing the state sector to be really effective.

Meanwhile, experts say that early parliamentary elections may well give an impetus to the development of parliamentarism Institute in Kazakhstan. Simply put, to expand the powers of Majilismen. It is time for deputies to not only correct the bills coming from the government, but also to begin to initiate actual bills. Especially since Majilismen were chosen by the people of Kazakhstan. Deputies hold regular meetings with the public, the voters, and thus have a so-called cut social opinions. Those. They know that it is important for ordinary Kazakhs.

In general, Kazakhstan has plenty of time to decide which of the parties, any ideas to entrust their future. After the elections, despite the criticism and provocation really can change something."