Japan's Emperor Akihito has declared his abdication and delivered his last public address as emperor, in a historic ceremony in Tokyo. 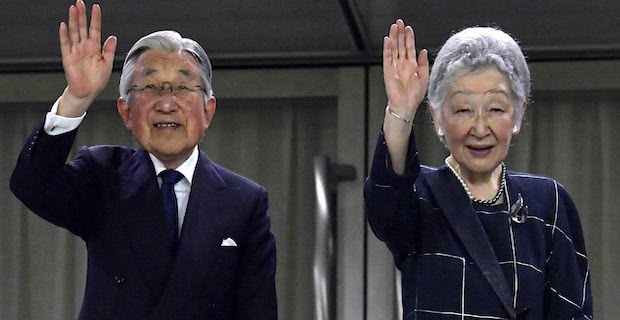 He is the first Japanese monarch to stand down in more than 200 years. The 85-year-old was given permission to abdicate after saying he felt unable to fulfil his role because of his age and declining health.  Crown Prince Naruhito will ascend the throne on Wednesday, beginning a new era. The emperor in Japan holds no political power but serves as a national figurehead. Making his final speech in a Western-style morning coat, Akihito said he "wished Japan and the world peace and prosperity". "I am deeply grateful for the people that accepted me as a symbol and supported me," he said. "Along with the empress consort, I hope from my heart the Reiwa era will be peaceful and fruitful, and I hereby pray for the well-being and happiness of our country and people of the world." After helping his wife, Empress Michiko, down the steps, the emperor turned and bowed towards the gathered officials as he left the room. Akihito's reign has been marked by his interactions with people suffering from disease and disaster, which have endeared him to many Japanese people.

What happened at the abdication ceremony?

In the first private ceremonies of the day, the emperor reported his abdication to the mythological ancestors of Japan's imperial family.

The Taiirei-Seiden-nogi, or main Ceremony of the Abdication of His Majesty the Emperor, took place at the Matsu-no-Ma state room in the Imperial Palace in Tokyo.

Imperial chamberlains carried Japan's state and privy seals into the hall, along with a sacred sword and a jewel which are considered symbols of the imperial family.

Speaking ahead of the emperor's address, Prime Minister Abe said: "While keeping in our hearts the path that the emperor has walked, we will make utmost efforts to create a bright future for a proud Japan that is full of peace and hope."

The ceremony ended with Akihito's final address, though he will technically be emperor until midnight.

Why did the emperor decide to abdicate?

Akihito is the first Japanese monarch to voluntarily relinquish the throne since 1817.

The 85-year-old said in a rare address in 2016 that he feared his age would make it hard for him to carry out his duties and strongly hinted that he wanted to stand down.

"When I consider that my fitness level is gradually declining, I am worried that it may become difficult for me to carry out my duties as the symbol of the State," he said then.

Akihito had surgery for prostate cancer in 2003 and a heart bypass operation in 2012.

Opinion polls showed that the vast majority of Japan sympathised with the emperor's desire to retire and a year later parliament enacted a law that made his abdication possible.

Who is the crown prince?

Prince Naruhito is set to become Japan's 126th emperor - and will officially lead the country into the new Reiwa era. It will mark the end of the current Heisei era, which began when Akihito ascended the throne in 1989.

The 59-year-old Naruhito attended Oxford University and become crown prince at the age of 28.

In 1986, he reportedly met his wife Crown Princess Masako Owada at a tea party. They married in 1993.

The couple's only child, Princess Aiko, was born in 2001. However, Japan's current law restricts females from inheriting the throne so she is not her father's heir.

Her uncle Prince Fumihito is first in line to the throne, followed by her cousin, 12-year-old Prince Hisahito.

Keywords:
Emperor AkihitoJapanese Emperor AkihitoCrown Prince Naruhito
Your comment has been forwarded to the administrator for approval.×
Warning! Will constitute a criminal offense, illegal, threatening, offensive, insulting and swearing, derogatory, defamatory, vulgar, pornographic, indecent, personality rights, damaging or similar nature in the nature of all kinds of financial content, legal, criminal and administrative responsibility for the content of the sender member / members are belong.
Related News