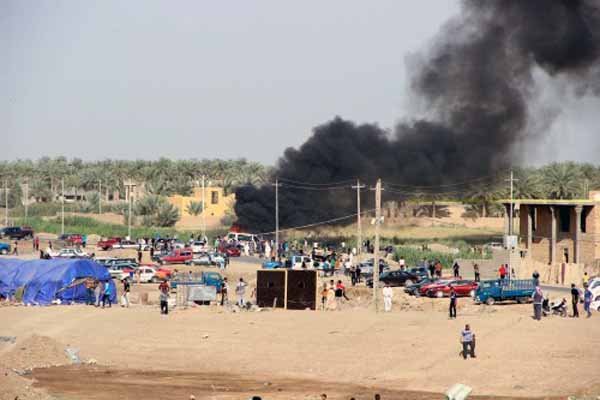 Deputy Prime Minister of Saleh Muhammed al-Mutlaq has submitted his resignation in protest of the ongoing violence, after incidents spread from Kirkuk where 53 people died and 114 people were injured to Salahuddin city.  On the other hand, Ayad Allawi, head of Iraqiya group, did not accept Al-Mutlaq's resignation, and asked him to follow up Hawijah case.  Allawi assigned Al-Mutlaq for three weeks to work on Hawijah incidents as well as demands of protestors.

7 soldiers 10 people lost their lives in the clash between protesters and security forces yesterday in the town of Suleymanbey in the province of Salahaddin.

Iraqi Prime Minister Maliki’s SWAT forces have moved from the town of Tuzhurmatu in the Salahaddin province to Suleymanbey. Following developments, security forces announced that the locals around the town of Syleymanbey must vacate their homes.

Clashes erupted between the SWAT teams of Iraqi Prime Minister Nuri al-Maliki and the people in the Iraqi province of Salahuddin.

The SWAT teams of Nuri al-Maliki were directed to Suleimanbeg district from Kirkuk and Baghdad where they clashed with protestors.  SWAT teams responded to demonstrators with helicopters and tanks and established control points for entry and exit in Suleymanbeg.

53 people died and 114 people were injured in the Hawijah town of the city of Kirkuk when Iraqi security forces intervened against demonstrators.

Iraqi Minister of Science & Technology Abd al-Karim al-Samarrai resigned in protest of the army's intervention during public protests in the Hawijah town of Kirkuk, while the incidents spread to Salahuddin city too.

Earlier in the day, Iraqi Education Minister Muhammad Tamim had resigned too in protest of the army's opening fire on demonstrators.

Turkish Foreign Ministry condemned the clashes in the Hawijah town of the Iraqi city of Kirkuk which killed tens of people on Tuesday.

The ministry also expressed sorrow over death of tens of people as well as more than 100 others' getting injured when the army intervened during public protests in Hawijah town of Kirkuk.

The ministry said that Turkey was ready to extend every type of help including the treatment of injured ones.

Death toll in Hawijah up

The death toll increased to 53.

Kirkuk Hospital officials told Turkish press on Tuesday that 30 more protestors, who had been injured seriously, died at the hospital, increasing the death toll from 23 to 53.

Meanwhile, the incidents spread to Salahuddin city where ten people, including seven soldiers, were killed.

Government sources do not make any statements about the casualties, while Iraqi army does not allow journalists to enter the region.