Hope for release of jailed journalists as appeal date set 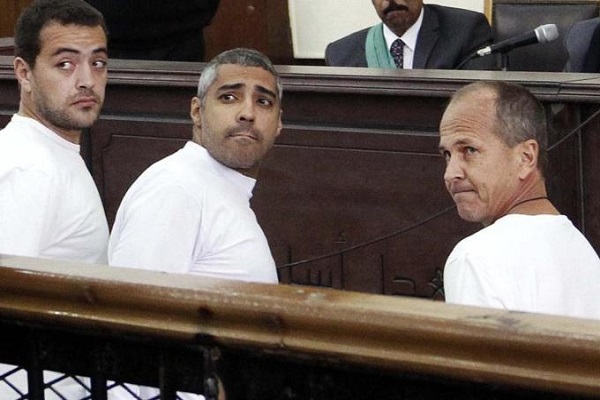 The hearing will look at the process behind the original trial, a process that Al Jazeera says was flawed, and is the basis of the appeal. The network hopes the three will be set free, though a retrial could also be ordered.

Baher Mohammed, Mohammed Fahmy and Peter Greste were sentenced to between seven and ten years in June, after being arrested in December last year.

Since the appeal was filed, another Al Jazeera journalist in a separate case, Ahmed Mansour, was convicted in absentia to fifteen years in jail.

“Baher, Mohammed and Peter have been incarcerated for nearly ten months on the patently absurd charges of falsifying news and being involved in terrorism. In reality, they are fine journalists, convicted on the basis of a weak investigation and a court case riddled with procedural flaws.

“We hope that the court date of 1st January means that the new year can herald a new chapter, with the release of our journalists and the betterment of press freedoms in Egypt.”

Al Jazeera will mark 300 days since the arrest of its journalists this Friday, 24th October, with 300 seconds of silence on-air, accompanied by images of the detainees and the campaign to release them.