Greek minister on Thursday promised to have miles of shoreline near the country’s capital cleared of oil from a recent spill “within 20-25 days”. 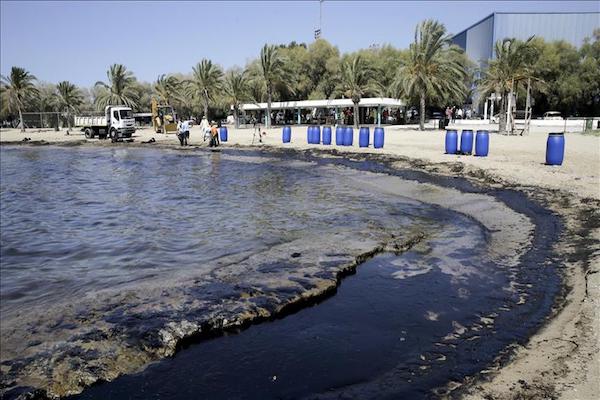 AvrupaLondon - A Greek minister on Thursday promised to have miles of shoreline near the country’s capital cleared of oil from a recent spill “within 20-25 days”.Miles of beaches and shoreline near Athens have been blackened after an oil spill from a sunken tanker, causing environmental concerns.A cargo ship -- the "Agia Zoni II", carrying 2,570 tons of fuel -- sank over the weekend while anchored in the Saronic Gulf near the country's biggest port, Piraeus.The oil slick from the ship has reached popular beaches in Glyfada and Alimos, southern suburbs of Athens.It has forced local businesses and beaches to shut down as thick layers of foul-smelling oil wash ashore.Ecology groups have blamed the government for acting too late to prevent the oil slick spreading.The World Wildlife Fund in Greece said the authorities were not prepared to protect the shore from what they called a "relatively small-scale incident".Clean-up crews and volunteers have intensified their work to clear the oil.Maritime Minister Panagiotis Kouroumplis, who is facing calls to resign from opposition parties, said all possible means were being used to clean the sea."The shores will be all clean in 20-25 days," he added, speaking to Athens-Macedonia News Agency on Thursday.