Germany and France to rebuild EU 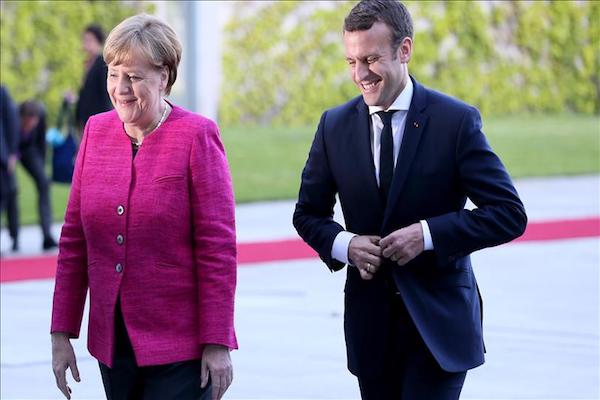 Speaking alongside France’s new President Emmanuel Macron, who made his first official trip abroad to Berlin, Chancellor Angela Merkel said the two countries agreed to work closely on a "road map" of reforms to make the EU and the Eurozone stronger in the coming years. “We share the common conviction that we cannot only focus on Great Britain’s departure from the EU, but rather we have to discuss ways to deepen our cooperation among the remaining members of the EU, among the members of the Eurozone," she said. Merkel underlined that addressing the migration crisis, further development of a common defense policy among EU member states and enhancing employment would be their priorities. About potential changes on the main EU treaties, Merkel said the union cannot resist the transformations across the world. “If we can answer the questions of why, what for and explain the usefulness of such changes, then Germany would be ready for that anyway,” she said, adding that she had briefly discussed this with Macron during the meeting. The French president underlined that changes to EU treaties had been a taboo for France in the past, but this would not be the case in the future.

"What is important is the political structures and the purpose of such changes,” he said, adding he would support treaty changes, if that becomes essential to make the EU and Eurozone more efficient. Macron, a 39-year-old centrist pro-Europe independent, had defeated far-right leader Marine Le Pen in France’s presidential elections on May 7, and was officially inaugurated as France’s 25th president on Sunday. The French president underlined that he would focus on implementing economic and social reforms in France in the coming months. “As I have said during my campaign, I will do so not because Europe requests this, but rather France needs it,” he said.