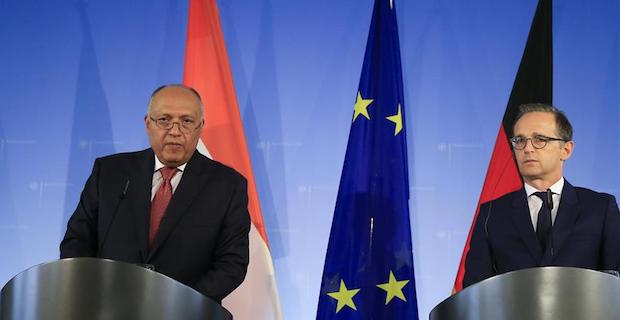 Germany has a keen interest in the stability of Egypt, German Foreign Minister Heiko Maas said on Wednesday.  Speaking at a joint news conference alongside Egyptian Foreign Minister Sameh Shoukri in Berlin, Maas said Egypt is an important partner for Germany in the region.  “We have a great interest in the stability of Egypt, as it is becoming an important partner, [and] also for the solution of problems in the region,” Maas said, referring to Palestine-Israel conflict, Syrian civil-war and turmoil in Libya.  He said Germany expected from Egypt to further contribute to de-escalation and support efforts for conflict resolution.

Germany’s top diplomat noted that during their talks with Shoukri, they have also discussed civil society, human rights and press freedom issues, and problems faced by the German political foundations.

Maas acknowledged continued differences on these topics, but said they will continue a dialogue on them.

Shoukri, for his part, expressed Egypt’s willingness to enhance cooperation with Germany in various fields, including efforts to stem illegal migration.

He also pledged that Egypt would continue to support diplomatic efforts to find peaceful solution to the conflicts in the region.

“There is no military solution to the conflicts in the Middle East, we have to find political solutions,” he stressed.

Keywords:
German Foreign Minister Heiko MaasEgyptian Foreign Minister Sameh Shoukri
Your comment has been forwarded to the administrator for approval.×
Warning! Will constitute a criminal offense, illegal, threatening, offensive, insulting and swearing, derogatory, defamatory, vulgar, pornographic, indecent, personality rights, damaging or similar nature in the nature of all kinds of financial content, legal, criminal and administrative responsibility for the content of the sender member / members are belong.
Related News