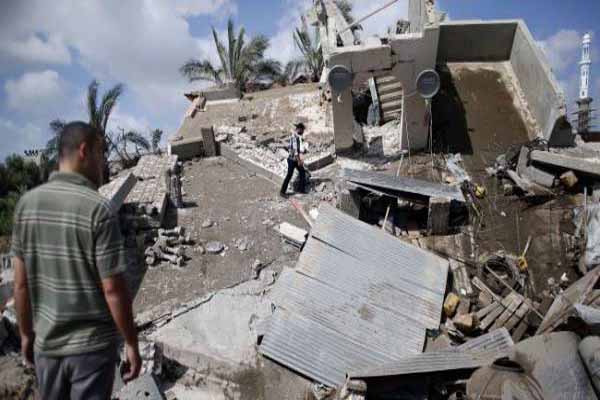 GAZA CITY (AA) – The Palestinian death toll from Israel's ongoing devastating military offensive in the blockaded Gaza Strip rose to 1045 on Monday, a Health Ministry official said. "Two Palestinians were killed by an Israeli strike on the northern part of the Gaza Strip," ministry spokesman Ashraf al-Qodra told Anadolu Agency. Earlier in the day, three Palestinians succumbed to injuries they sustained days ago in Israeli airstrikes on Gaza. A fourth Palestinian was killed in an Israeli shelling of eastern Khan Younis in the south, al-Qodra said. He added that at least 6235 Gazans had been injured since the beginning of the Israeli onslaught on July 7, which Israel said aims at halting rocket fire emanating from the blockaded strip. Israel's military operation, dubbed operation "Protective Edge," is the self-proclaimed Jewish state's third major offensive against the densely-populate Gaza Strip – which is home to some 1.8 million Palestinians – within the last six years. On Saturday, rescue workers managed during a 12-hour humanitarian lull to recover the bodies of 117 Palestinians, including children and women, from the rubble of homes devastated by Israeli strikes on the eastern and southern parts of Gaza. Apart from the human toll, Israel also destroyed 2330 Gaza housing units and partially destroyed 23,160 other apartment blocks, according to the Palestinian Ministry of Works and Housing. Around 43 Israeli troops were also killed in Gaza combat, while three civilians were killed by Gaza rocket attacks on Israeli cities.