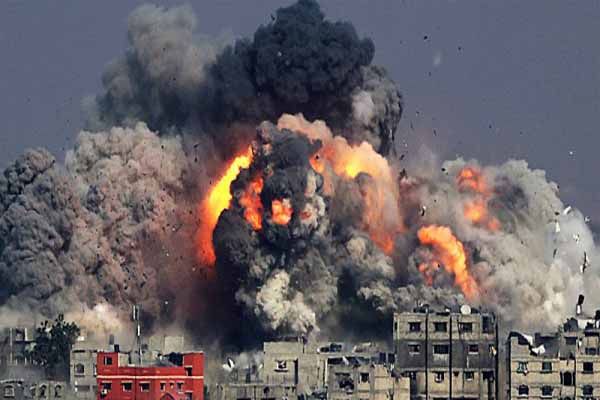 By Erol Avdovic NEW YORK The death toll from the ongoing Israeli onslaught on Gaza could be higher than what official figures have revealed, according to Riyad Mansour, the Palestinian representative to the UN. With numbers of dead and injured rising day by day, the official Palestinian death figures may not be complete, Mansour told the Anadolu Agency on Thursday. "And the fact that there are hundreds of children that have been killed, and thousands of them injured -- the total number of killed and injured so far in less then one month is -- ten thousand," said Mansour. He said that the real picture of the catastrophe has not been seen so far and that the ongoing tragedy surpasses the one caused by the previous series of Israeli aggression in 2009. Israel has been pounding the Gaza Strip for almost four weeks, which killed at least 1,458 Palestinians and injured more than 8,300 others, according to Palestinian health ministry. Israel claims that the offensive aims to undermine the ability of Palestinian factions to fire rockets at Israeli cities.
Quoting UN sources, Palestinian envoy in New York said 80 percent of those killed Palestinians in Gaza are civilians. Mansour asked: "So, when you have a situation before you -- with whole areas completely destroyed, and all buildings being floored, with the ceasefire just for a few hours for people only to dig under the rubbles, (...) then how do you describe that situation?" "One can not describe that situation in any other term except that this is an extermination, a genocide against the entire population of Palestine," he said. Israel on Friday declared the collapse of a 72-hour humanitarian ceasefire with Palestinian factions in the Gaza Strip. Israel's military coordinator in the Palestinian territories told UN envoy Robert Serry that the ceasefire was annulled, a senior Israeli official told Israeli daily Haaretz. Mansour also warned against the possibility of an outbreak of epidemics in Gaza if the current situation continued. "God forbid -- with the possibility of epidemics to invade the Gaza Strip -- thousands and thousands of people more may die on the daily basis, and those tens of thousand being injured may fall ill." He said the UN and its Security Council should do more than "pronouncing the right words. "If the Security Council, which is the place that gives people hope, (...) is not acting within its mandate, then where should the Palestinian people go?" he asked. Mansour said that another aspect of the conflict was to seek concrete protection of the UN Secretary-General to ensure the application of the special humanitarian condition in the Gaza Strip. "I delivered the letter of President (Mahmoud) Abbas in which he asked UN Secretary-General to declare Gaza as an area of catastrophe," Mansour told the AA. "This catastrophe is not natural made, like one in the Philippines or in Haiti after the typhoons and hurricanes or earthquakes. This one was made by humans, leading to similar results of anguish, destruction and pain." He said Palestinians were ready to work for peace and comprehensive solution although the UN Security Council was deeply divided and politically polarized on certain issues. "I am not discussing the details of what the Security Council should do. I am only saying that the Security Council is capable and has the power to act decisively to bring an end to this situation," Mansour said. "So that’s why we keep knocking on the door of the Security Council with the strength of all our supporters that we have from many countries in order to stop genocide against our people."