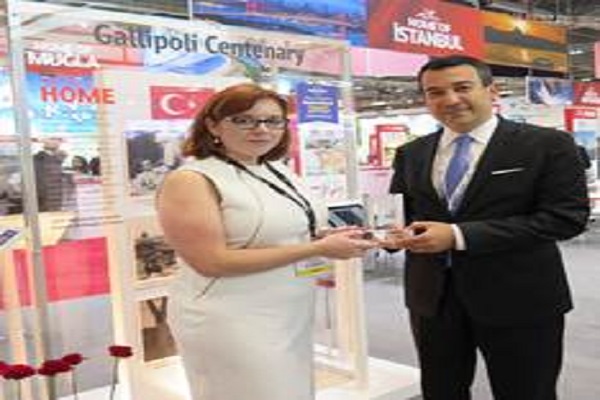 With the Gallipoli Peninsula taking the number one spot for regions in Lonely Planet's Best in Travel 2015, Turkey is highlighting the region's must-see status at this year's World Travel Market (WTM) by commemorating the centenary of the World War I battle fought there with a stand of war-time photographs.

The year 2015 marks the centenary of the Battle of Gallipoli with the area around the Gallipoli Peninsula (Gelibolu) holding special significance for Turkey, UK, New Zealand and Australia. Its inclusion as a must-see for next year in Lonely Planet’s Best in Travel 2015 is extremely timely as one of Turkey's focuses at WTM for the upcoming year is the Gallipoli region.

One of the globe’s leading travel fairs, London's WTM opened its second day with Lonely Planet’s Senior Vice President of Sales Carla Pearse presenting the highly regarded Must-See Region Award for Gallipoli to General Director of the Turkey Directorate of Tourism Promotion and Advertising, Irfan Onal. The event took place against the backdrop of the Gallipoli centenary commemoration stand, highlighting the importance of the centenary, the diversity of the region and the unity the commemoration represents.

Lonely Planet’s Best in Travel 2015 is the highly anticipated collection of the world’s hottest trends, destinations and experiences for the year ahead with editions available in English, French, German, Italian and Russian. The bestselling, inspirational travel yearbook from the world’s leading travel authority highlights the top ten countries, cities and regions that Lonely Planet’s experts recommend travellers experience in 2015.