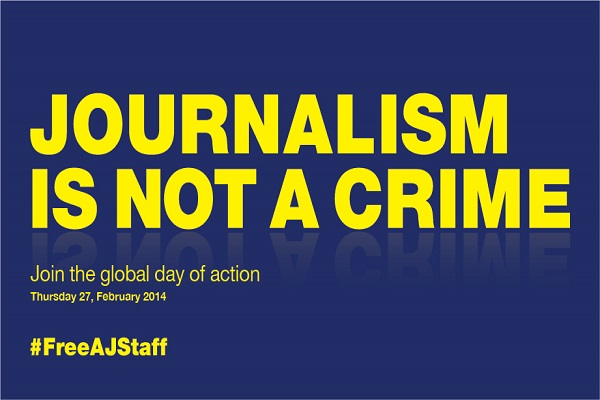 Stands of solidarity, vigils and events planned in over 30 cities across the world

Events supporting Al Jazeera’s detained journalists in Egypt are planned in over thirty countries for this Thursday.

The campaign has already had an outpouring of popular and political support worldwide, and this looks set to ramp up further with public events taking place in Sydney, Manila, Islamabad, Doha, Amman, Jerusalem, Nairobi, Ankara,  Berlin, London, Rio, Montreal, Washington DC and San Francisco. Nearly every continent of the world will see action.

Al Jazeera hopes through the attention of the world’s media and partners, pressure can be brought to bear on the Egyptian authorities to hasten the release of Peter Greste, Mohammed Fahmy, Baher Mohamed and Abdullah Al Shamy by reminding them in a united voice, that journalism is not a crime.

To build on the online #FreeAJstaff campaign which has had a quarter of a billion impressions on twitter alone since the 1st February, Al Jazeera will be using Thunderclap which will allow people to pledge a Tweet, Facebook post, or Tumblr post containing the same message that’s unleashed all at the same time throughout the world.

Commenting on the Action Dr. Mostefa Souag  A/ General Director of Al Jazeera Media Network: “We truly appreciate the solidarity from everybody right around the world. The pressure, support and calls for our colleagues to be released have continued to keep the story in the news. The Global Day of Action is about the freedom of the press, it is about objective reporting and to ensure journalists cannot be gagged or silenced.

"We ask everyone to contribute to the Global Day of Action on Thursday 27th February. Journalism is not a crime.”

Baher Mohamed, Mohamed Fahmy and Peter Greste of Al Jazeera English have been detained since 29th December 2013. Al Jazeera Arabic’s Abdullah Elshamy has been detained without charge since 14th August 2013, and has been on hunger strike in protest since 23rd January. The hashtag #FreeAJStaff has been viral worldwide, and institutions including the White House, EU and the UN have called for the release of the journalists, and for press freedoms to be upheld.