The Leveson Inquiry is casting a shadow over Britain’s free press, and state regulation would set a disastrous precedent for the rest of the world.That was the warning from FPA President Jurgen Kronig in his speech at the FPA Media Awards on Tuesday Novem 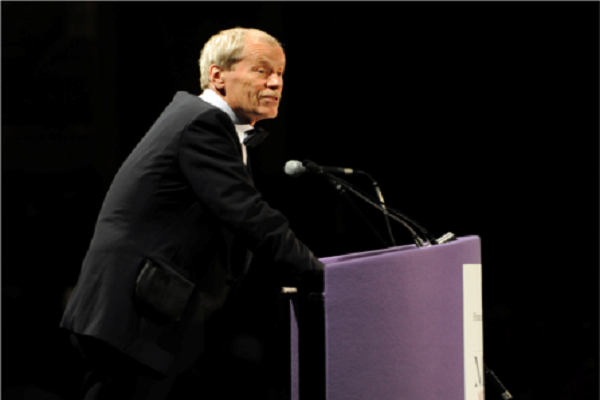 Good Evening Ladies and Gentleman, Friends and Colleagues, Welcome to the thirteenth annual FPA Media Awards – What makes these awards different is that they have been decided by foreign judges – panels of FPA members from all over the world spending many hours reading, watching and listening to the best journalism submitted by you and hundreds of your colleagues. To reassure those who might be worried about too much non British influence I would like to point out that there were 3 distinguished British judges as well, Julia Somerville, Michael Binyon and John Lloyd who helped us to our final decisions. My Thanks go to all our judges.

All in all a record 260 entries this year across 12 categories! As Chairman of the final judging session I can tell you that whatever the problems facing our trade, and there are quite a number, the quality is there, and indeed many of the best journalists are here with us tonight.
I would also like to place on record my sincere thanks to all our Awards sponsors – this is not a ritual, or dare I say, British politeness; the simple truth is that we could not hold these annual awards without our sponsors. The FPA sincerely appreciates your support.
I have one further big thank you – to my predecessor as President, Hosny Emam. Without his untiring efforts over many of the past thirteen years as Chair of the Annual Awards we would not be here tonight. Thank you Hosny!
The nineteenth century German journalist and poet Heinrich Heine was once asked where he wanted to die. He did not hesitate before answering he hoped to die in England: because, he said, everything there happens one hundred years later.
Now of course, as you will appreciate, Germans are usually right about everything. But here Herr Heine got it completely wrong, as do, I have to say, many Continental Europeans and even some British people. Here, in this country, most things happen earlier, sometimes hundreds of years. The first steps towards democracy, the Magna Carta, the birth of Capitalism, the Industrial Revolution, and with it: tinned and convenience food. And in the last few decades we saw the emergence of what I like to call the first “mass media democracy” with the Reality TV programmes that are an integral part of it. More than 40% of Reality programmes shown worldwide are being created by Britain’s “creative industries”. At least one area in which complaints about the lack of exports are wide of the mark. Why did Heinrich Heine get it so wrong? Because he was deceived by Britain’s genius in preserving the best of their traditions while being at the forefront of change and inventiveness. You hold on to the Monarchy and have one of the most stable democracies in the world: George Orwell’s “Crowned Republic”.
But my worry is for the immediate future. Will you give up what served you so well in the past? I am talking about the long and noble tradition of a free press, free of political control and state regulation. (We foreign journalists coming to London are swiftly confronted with this deep cultural commitment to press freedom: no register of journalists, no legal requirement even to have a Press Card.) The shadow of the Levenson enquiry is still hanging over the media. Britain has in my view the freest, most probably the best press in the world. At the same time it can be the most irresponsible press. Two sides of one and the same coin.
Without doubt there has been some disgraceful, embarrassing and at times illegal behaviour by some journalists in recent times. Still - the future will not be made safer by compliance officers. Another lesson of the last year is that there is no clear divide between good and bad media, between evil commercial empires and virtuous newspapers and high minded public broadcasting; you find bias and sinners on all sides.
It would send a dangerous signal to the world if this nation chose now to introduce such controls. It would send a disastrous message to countries around the world. And indeed, the news from many countries is worrying. The pressure is growing, attempts to prevent journalists reporting the truth are happening in many countries around the world, not only in dictatorships but in democracies like India. Closer to home, in southern Europe, economic pressures are accelerating changes in our industries. (Only last week 129 of the editorial staff at the great Spanish newspaper El Pais lost their jobs; it is not an isolated incident and it is not confined to Spain. As Clay Shirky put it: “the old is dying before the new appears”. )
Let’s hope we gather here again next year to celebrate another year of excellent reporting, unshackled by new political controls.
Sadly and inevitably we have lost colleagues this year reporting from dangerous places and under oppressive regimes. The International News Safety Institute reports 112 journalists and media staff killed – so far - in 2012 in a host of countries; we salute them all. And to all my fellow journalists I would say: keep up the good work, keep reporting, inquiring, revealing, informing. Thank you very much and please enjoy the evening.
Your comment has been forwarded to the administrator for approval.×
Warning! Will constitute a criminal offense, illegal, threatening, offensive, insulting and swearing, derogatory, defamatory, vulgar, pornographic, indecent, personality rights, damaging or similar nature in the nature of all kinds of financial content, legal, criminal and administrative responsibility for the content of the sender member / members are belong.
Related News