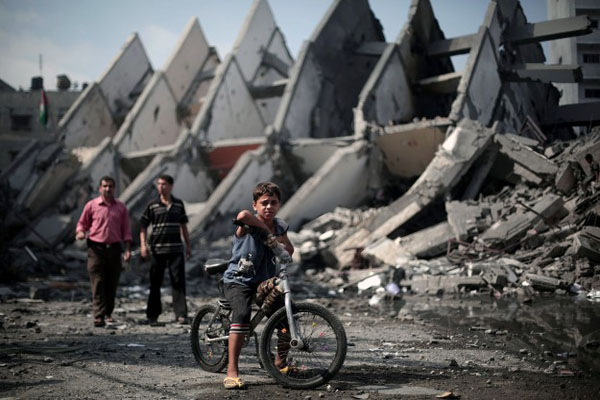 The new school year has been postponed in the strip since Sunday, as most schools were turned into bomb shelters for families fleeing relentless Israeli bombardments from air, land and sea.

Banks have reopened and electricity authority workers began repairing the power grids damaged over the course of Israel's onslaught.

Displaced Palestinian families from areas close to the border with Israel began returning home, while some Palestinians whose homes were completely destroyed returned to sift through the rubble.

An Egypt-brokered cease-fire went into effect as of 16:00 GMT Tuesday, ending 51 days of relentless Israeli attacks on the Gaza Strip, which saw 2,143 Palestinians killed – the vast majority of them civilians – and over 10,000 injured.

The cease-fire deal calls for opening all border crossings between the Gaza Strip and Israel – effectively signaling the end of the latter's seven-year blockade on the coastal territory.

It also calls for reopening Gaza's borders and expanding the zone in which Palestinian fishermen are allowed to ply their trade to six miles off the Gaza coast.

The agreement further calls for negotiations on other core Palestinian demands – including the release of prisoners and the establishment of a Gaza seaport – to resume after one month.

Over the course of Israel's offensive, launched with the stated aim of ending rocket fire from Gaza, at least 68 Israelis – 64 soldiers and four civilians – were killed, according to Israeli figures.

Israel's "Operation Protective Edge" was the deadliest offensive against the Gaza Strip since Israeli forces withdrew from the enclave in 2005.

The number of Palestinian fatalities from the just-concluded offensive surpassed the combined death toll from two previous operations against Gaza, including Israel's 21-day "Operation Cast Lead" in 2008/09 in which at least 1500 Palestinians were killed.