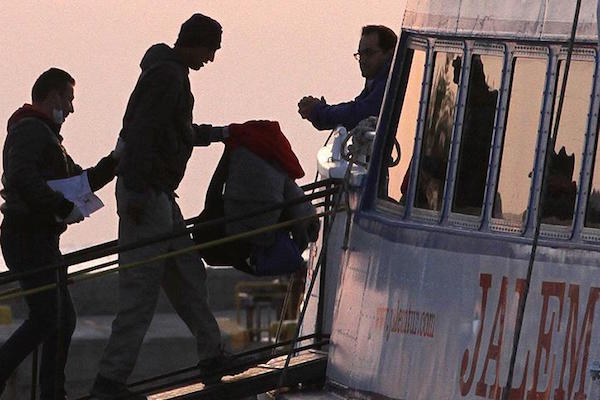 LESBOS, Greece-The first migrants to be returned to Turkey under a deal with the EU arrived from the island of Lesbos on Monday morning.

An Anadolu Agency correspondent on the Greek island a few kilometers (miles) from the northwest Turkish coast said 131 were taken from Moira camp by bus. They were accompanied by officials from Frontex, the EU border agency, to a nearby port and ushered on to two ferries.

A Frontex official, who spoke on condition of anonymity due to restrictions on speaking publicly, said the migrants were mostly from Pakistan.

They arrived a short time later in Dikili, where preparations have been underway to receive the returnees, including heightened security and medical screening.

Moira houses around 1,600 migrants while around 2,500 others are waiting on other Greek islands to be returned to Turkey.

Under an agreement between Turkey and the EU, “irregular migrants” will be returned to Turkey from Greece in a one-for-one exchange for refugees in camps in Turkey, where around 2.7 million Syrians have fled the civil war in their country.

The deal is designed to break the people-smuggling gangs who have been trafficking refugees across the Aegean Sea, resulting in hundreds of deaths.