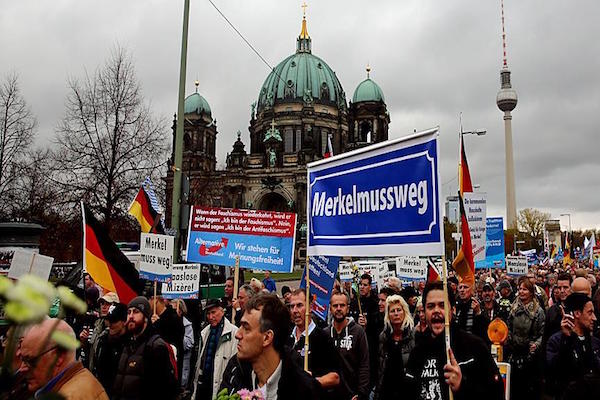 BERLIN (AVRUPA TIMES)-Germany’s far-right Alternative for Germany (AfD) adopted a controversial party program Sunday that called for banning Islamic symbols and restricting religious practices of Muslims. The majority of AfD’s some 2,000 delegates backed the program in a vote after a debate at the party’s national congress held in western Stuttgart city.

The program’s chapter on Islam was titled “Islam does not belong to Germany” and it included various proposals to ban public expressions of Islam.

It demanded a ban on mosque minarets and muezzins’ call to prayer, depicting them as symbols of Islamic power.

It also called for a bar on veils such as the niqab or burka in public, and on headscarves at schools.

Recent polls show that AfD has become the third largest political party in Germany amid growing worries over the refugee crisis and religious extremist attacks in Europe.

A representative poll by the public broadcaster ARD last month showed that the AfD increased its support to 14 percent, leaving behind the Green Party and the Left Party, the two leading opposition parties at the federal parliament.

The AfD, which was founded only three years ago as a protest movement, achieved record support in regional elections in March with an anti-immigration and anti-Islam propaganda.

Germany, which will hold general election next year, has the second-largest Muslim population in western Europe.

Among the four million Muslims in the country, three million are of Turkish origin.