EU leaders to gather for Brexit summit on Nov. 25 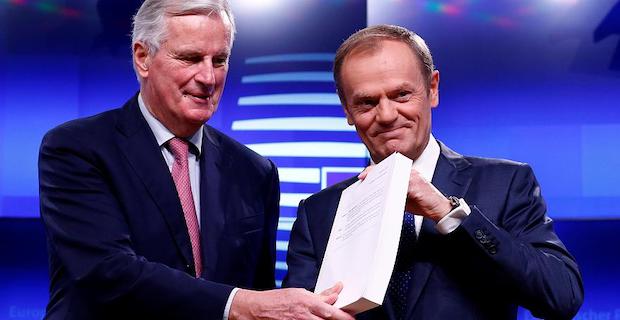 EU leaders will gather to finalize a draft Brexit agreement on Nov. 25, the European Council president announced on Thursday.

Speaking at a press conference following a meeting with EU’s chief Brexit negotiator Michel Barnier, Donald Tusk said that the European Council will meet to finalize the draft "if nothing extraordinary happens".

"We have always said Brexit is a lose-lose situation and these negotiations were always about damage control," he added.

Tusk said that 27 EU ambassadors together with European ministers are currently analyzing the draft deal and will meet by the end of the week to discuss it.

After the conference, Barnier handed over the draft agreement to Tusk which was approved by the British Cabinet on Wednesday.

The full details of the deal are expected to come to daylight on Thursday with May’s statement to the parliament.

Keywords:
Brexit SummitEU Leaders
Your comment has been forwarded to the administrator for approval.×
Warning! Will constitute a criminal offense, illegal, threatening, offensive, insulting and swearing, derogatory, defamatory, vulgar, pornographic, indecent, personality rights, damaging or similar nature in the nature of all kinds of financial content, legal, criminal and administrative responsibility for the content of the sender member / members are belong.
Related News