Turkish President Recep Tayyip Erdogan discussed the extradition of Fetullah Gulen from the U.S. during a telephone call with President Barack Obama on Tuesday, the White House said. 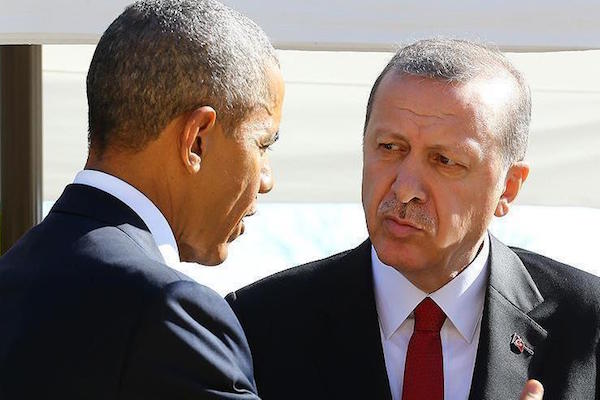 Turkish President Recep Tayyip Erdogan discussed the extradition of Fetullah Gulen from the U.S. during a telephone call with President Barack Obama on Tuesday, the White House said.

“The president made clear to President Erdogan that the United States doesn’t support terrorists and doesn’t support individuals who conspired to overthrow a democratically elected government,” according to White House spokesman Josh Earnest.

He said Obama “reiterated once again the strong commitment of the United States to the democratically elected civilian government of Turkey” and commended the Turkish people’s effort in “defending the government and repelling the coup” last week.

Turkey accuses U.S-based cleric Fetullah Gulen of being behind the coup attempt last Friday and has demanded that he be extradited to face trial.

According to Earnest, the decision to extradite Gulen is not a decision to be made by Obama but a "legal decision" based on the "long-standing treaty" between the two countries.

Earnest also praised the strength of the "Turkish people's commitment" to democracy, democratic institutions and the "commitment of political leaders to the notion of democracy even in the face of some profound political disagreements."

Materials related to the extradition of the cleric who lives in self-imposed exile in the U.S. state of Pennsylvania were submitted to U.S. authorities by the Turkish government in electronic form, according to Earnest.

The Justice Department and other U.S. agencies are now reviewing the documents and will take action in accordance with a decades-long treaty between the two countries with respect to the extradition of criminals, the White House said.

The U.S. said it was "understandable" and "justified" for the Turkish government to detain more than 6,000 soldiers, 1,481 judiciary members and 210 police officers who are linked to the coup attempt.

"We understand the tremendous stress that the government is going through," State Department spokesman Mark Toner said.

He added it was quite normal that Turkey takes actions "to go after the perpetrators to conduct a thorough investigation into what happened".

Toner stated that they also urged democracy in Turkey to continue while it supports "completely the efforts to bring the perpetrators of the coup to justice."

The Turkish presidential press center said in a statement that Obama condemned the attempt to overthrow Turkey’s democratically elected government and made it clear the U.S. supports democracy in the country.

The statement also said Obama told Erdogan the U.S. is ready to cooperate with Turkish institutions investigating the coup attempt.

Erdogan told Obama the proper punishment would be given to those responsible within the framework of justice and the rule of law.