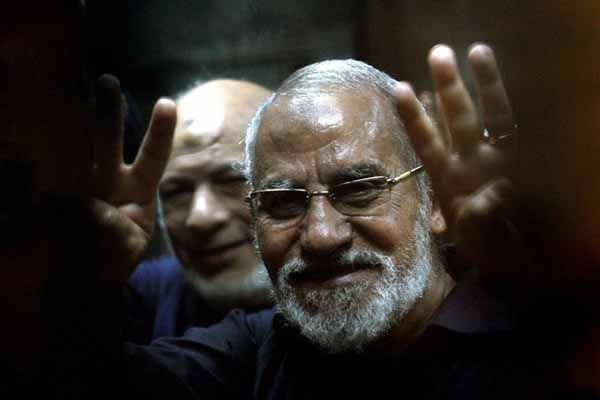 An Egyptian court on Saturday sentenced Muslim Brotherhood Supreme Guide Mohamed Badie and seven others to life in jail over violence-related charges, an Anadolu Agency correspondent reported. The court also sentenced six defendants to death in absentia, including five senior Brotherhood members, the AA reporter who attended the verdict's session said. The 14 defendants are accused of murder and incitement to violence during deadly clashes in the Giza province on July 22 of last year, as well as membership in an outlawed group that aims to carry out terrorist acts. The verdicts reduced possible death sentences handed down earlier to the 14 defendants in the same case. The same court earlier this month referred the 14 defendants to the grand mufti, Egypt's top religious authority, for his opinion on possible death sentences against them. The referral came despite the fact that the mufti had earlier opposed the death sentences slapped against the defendants by the same court, citing the lack of enough evidence. The opinion of the mufti is not binding to the court, but Egyptian law makes it necessary for judges to seek a religious point of view on any death sentence.

Six others– five Brotherhood members and leader of the Gamaa Islamiya group Assem Abdel-Maged - were sentenced to death in absentia.

The verdict is not final and can be appealed, the defendants' lawyers said.

Defense lawyer Mohamed al-Damati slammed the verdict as "politicized" and said that they would file an appeal within days.

The trial was the latest in a series of cases in which ousted president Mohamed Morsi's supporters have been charged with inciting violence – accusations the defendants emphatically deny.

Morsi, Egypt's first freely elected leader, was ousted by the army last year – and later imprisoned on a raft of criminal charges – following massive demonstrations against his presidency.

The government has since designated the Muslim Brotherhood, the group from which Morsi hails, a terrorist organization.