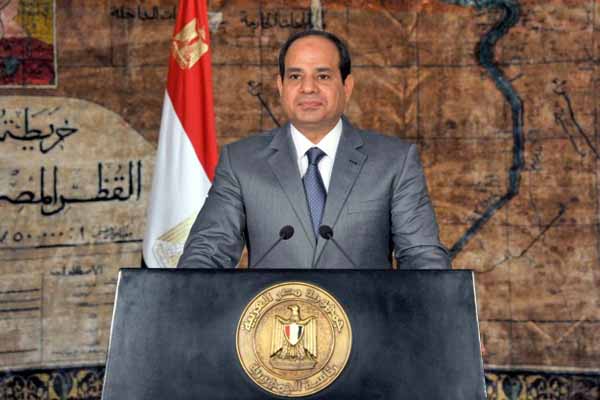 Egyptian President Abdel-Fattal al-Sisi has asserted that his country is committed to "non-interference" in next-door Libya in spite of the possible negative impact of the deteriorating situation there on Egypt. "Although Egypt is the most side affected by the deteriorating political and security situation in Libya, it is committed not to interfere in Libya's domestic affairs," al-Sisi was quoted by a presidential statement as telling a visiting U.S. congressional delegation late Thursday. Al-Sisi said that the NATO operation in Libya that helped the armed opposition during the uprising against late strongman Muammar Gaddafi in 2011 was "incomplete and left the country with no national army or police to protect its citizens." He also reiterated his country's support to the recently-elected parliament, denouncing what he said "the minority's rejection of democracy and resorting to violence to impose its vision by force of arms." Earlier this week, Egypt denied any link to a series of airstrikes – of seemingly unknown origin – that hit military camps recently in the Libyan capital Tripoli.

The Libya Shield, which is widely seen as a pro-Islamist militia, also accused Egypt and the UAE of being behind the airstrikes that targeted its camps in Tripoli.

The militia is already engaged in fighting with rival militias in the Libyan capital over control of its strategic facilities.

On Saturday, it said it gained full control of the Tripoli airport after flushing out militiamen loyal to Al-Qaaqaa and Al-Sawaaq.

Since mid-July, the two militias have been locking horns in and around Tripoli, almost totally destroying the airport and wreaking havoc in the flashpoint city.

Libya in general has recently witnessed heavy fighting between a loosely organized army and militias that clung to their weapons following a bloody uprising in 2011 that ended the Gaddafi rule.

Libya's deteriorating security and political situation has posed a problem for neighboring Egypt, Algeria and Tunisia.

Egyptian officials have warned of an increasing influx of weapons into the country from Libya since Gaddafi's ouster and death.

Last month, more than 20 Egyptian border guards were killed in an exchange of fire with militants near the Libyan border.